Talking #Africadia and Afropolitanism: An Interview with Artist Siwa Mgoboza

Siwa Mgboza is an emerging artistic talent from South Africa working primarily with a South African textile called isiShweshwe. He is represented by Loft Art Gallery in Casablanca, Morocco, Matter Gallery in Toronto, Canada, BoxArt Gallery in Verona, Italy and Semaphore Gallery in Neuchatel, Switzerland. He was recently showcased at the sixth London edition of 1-54 Contemporary African Art Fair at Somerset House, by the Loft Art Gallery. Between 4-7th October, 1-54 exhibited work by 130 artists linked to Africa and its diaspora, with the 43 participating galleries representing a diverse set of global perspectives from 21 different countries, 16 of which were from Africa. I caught up with Siwa between meeting clients to discuss Africadia, Afropolitanism and his exploration of the globalised African sense of self.

Can you talk me through your art background and how did you come to be represented by Loft Gallery?

I was born in Cape Town, I lived in Pretoria for a bit, then moved away to Lima in Peru, and then lived in Poland after that. At the age of 18 I went back to South Africa to study at Michaelis School of Fine Art, University of Cape Town and graduated in 2015, and have been working as an artist since. Someone from Loft Art Gallery saw my work online, they approached me about representing me and here we are!

When you talk about your practice you mention a “globalised African sense of self.” Is this something that comes from your travels, the movements you have made?

Very much so. I was always the outsider in those places, and I moved back to South Africa and was suddenly caught in a liminal space where I was an insider but was rejected by those people so I immediately became an outsider as well. [I questioned] what is truly home? Where? What is it that I define to be African, or understand to be African, is it where I live? Is it where my family live, is it where my cultural heritage is? I began to question the authenticity of being African and borders, and moving in the changing spaces and how does one adapt? As a human- when you are in particular spaces-  you adapt, try to integrate in some way, and little did I know when I was doing those things it was laying the foundation blocks for who I would become. I still think about these things that I was taught in all these different places, and things that I was taught about my own culture by my parents, and going home myself at the age of 18, and then rediscovering myself and suddenly realising that I needed to understand myself because my culture was the one thing I was going to inherit, and was the one thing I could pass on.

Do you mean from where you were born?

Yes, I am Hlubi which is half Xhosa and half Sotho, we are a very small tribe in South Africa. I started to question where I came from, my position in this world, and how and why are the things happening around me, in terms of racism, homophobia, xenophobia? All these things which are sometimes difficult to speak about- that’s why I find sometimes the work becomes so joyful, celebratory and carnivalesque – because I think that it allows me to catch the viewers’ attention and then I draw them in, and once they are drawn in visually they start looking and analysing and then you start realising, actually this work isn’t as joyful as it looks, there is more going on, it’s speaking about the socio, political and economic, which are often swept under the rug.

So how does the idea of being connected, going out to the global and coming back to the local work in the art you produce?

I created this world called ‘Africadia’, which is an African Arcadia. It’s a liminal space where the labels we have- and are so obsessed with- are eliminated. Race is foregone, as you can see in the pictures, the characters- or beings as I call them- are multicoloured, they are not gender specific, they are not sexuality specific, they are a combination of animal, human and nature. What I really speak of is- how do we transcend labels and start to exist as beings before we are human, animal or nature. If you think of humans and the ego we have- a form of hierarchy has erupted as a result leaving those beings who do not have the same ‘voices’ to go extinct and diminish. A similar comparison could be made between black/white lives, gender, race, sexuality, etc. In this work all of the animals, humans and nature live side by side and are a hybridised species of each other, thereby leaving very little room to judge or criticize another.

There is a lot packed into the works, they are very dense and complex

They are textile collages which blur the lines of tapestry, beading, sculpture and photography, so like a painting is composed, things like perspective, depth, light and scale are carefully considered. The multi-media works reminded me of the jungle as a space to escape, and how things look, and everything is so densely layered but still light. I particularly loved cubism and abstract expressionism when I majored in painting at Michaelis, but I never painted in my fourth year, I started working with the textiles and they excited me more than the actual paint. I was working for a long time with wax and I got to the point where I found I couldn’t make a different mark with my hand, and I got quite frustrated, and so the textiles allowed me to work quickly and get my  ideas out faster.

How long would it take to make an artwork, and this work produced solely by yourself?

I work with a team of three ladies who work with the sewing and the beading because that’s the most time-consuming part and every now and again we outsource. It can take months to complete a piece, it depends on how much it demands of me. It can be a couple of days, a couple of weeks, a couple of months! 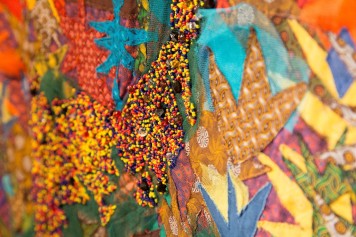 Life. My lived experiences, the reality I live in, the world. When I started it, [my work] was very much about myself, or what was locally around me, and it went from that local to a ‘glocal’ scale, these problems are things which people encounter all over the world, it’s just that sometimes we don’t talk about them and we don’t say, ‘oh yes there is actually racism in this place’, or ‘we don’t accept each other even though we all look the same.’ How do we talk about these difficult things? That inspires me.

Have you heard of the notion of ‘Afropolitanism’, I am looking at this from an art world perspective, as in an idea connecting spaces of the art world, is this a concept you have encountered, do you feel there is an Afropolitan aesthetic to your work?

Yes, the idea of being ‘open to difference’ and transcend what it means to be a global citizen… Yes, that’s essentially who I am as well, it’s this idea of living here but growing up elsewhere and picking up that culture and finding parallels in that world and your world- and essentially you are making your own culture. We know we don’t live in an isolated world, what happens in Africa affects what happens in the Middle East, affects what happens in the US, affects what happens in Asia and so forth. We are all connected but we have been programmed to close borders and isolate what is different from us. And that’s how race was constructed, they [Europeans] said that if you don’t look like this, you are a particular type of person, and in South Africa the legacy of it is deep, even though we are 24 years out of it it’s still very much alive. So how do I start to exist in a space and not be shackled by these labels, or the actual physical space and live my best life without feeling like I have to conform to make others accept me? At the end of the day, we are all made of cells and are trying to exist and thrive in this world, isn’t that the case? So should we all not be concerned about socio, political and cultural? We should be! 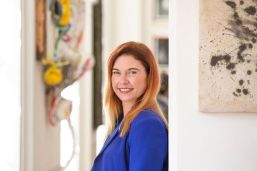 Stacey Kennedy is a PhD candidate in African Studies and Anthropology at the University of Birmingham, UK. Her AHRC-funded research through Midlands Three Cities Doctoral Training Partnership focuses on women’s agency in the African contemporary art world, specifically exploring Afropolitan art networks to investigate how women negotiate and connect global art spaces. Stacey was awarded her BA Hons in African Studies from the former Centre of West African Studies, and returned to Birmingham University to achieve her MRes at DASA in 2017. This research was based upon a study of the African contemporary art market at Bonhams Auction House in London, and was awarded the RE Bradbury Memorial Prize for best thesis. Her research is interdisciplinary, amalgamating anthropology and art history methodologies and research practices, to contribute to the study of African art history, as well as debates around gender and feminism within Africa and its Diasporas in the contemporary moment.

Like Loading...
‹ Call for Papers: ‘Intercultural Encounters’, A Book in Honour of Ojaja II (Deadline: 30 April)
Save the date: The Uganda International Writers Conference, Kampala (15-17 May) ›