“An excoriating critique”: Review of Leye Adenle’s ‘When Trouble Sleeps’ 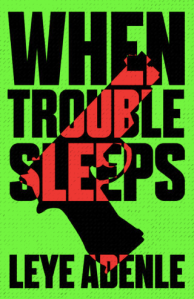 Leye Adenle’s noir thriller, When Trouble Sleeps, is an excoriating critique of contemporary Nigerian society. From the prologue, with its melodramatic plane crash to the surprisingly satisfying conclusion, this novel is relentless in its examination of the endemic corruption that plagues every stratum of Nigeria society from the chaotic, squalid Oshodi Market to the Olympian heights of the nation’s Senate. In particular it is the rigged electoral system which Adenle lays bare in this ultra-dark, bleak, and yet entertaining and engrossing crime novel.

Adenle weaves together a number of plotlines which converge due to the efforts of the strongly feminist detective heroine, Amaka Mbadiwe. Not much background information is provided about Amaka, except that she is a lawyer and the daughter of an ambassador, but the reader soon realises that she is a formidable detective – courageous to the point of recklessness, highly intelligent, well-connected, and guided by an indestructible moral compass. On the trail of Malik, a depraved and dangerous brothel-owner, Amaka enlists the help of sex-workers, police, politicians, and friends. Malik is linked to high-ranking politicians and the richest, most powerful Nigerians in Lagos. With every character in this caste of rogues and at every sharp and sudden turn of the plot the reader is confronted with gross corruption, sadism, violence, and injustice. Gubernatorial candidates jostle for power whilst “godfather” figures pull strings in Machiavellian scenes of stupefying political perversion and general degeneracy.

To counter this dramatic portrait, Adenle creates an intrepid detective who is motivated, it seems, solely by her desire to protect and champion the rights of women. She is assisted by an incorruptible policeman, Ibrahim, and his competent and brave officers. Given that early in the novel we are told that police in Nigeria are puppets of the rich and that any dissenting officer could be “relocated to a post in Boko Haram territory for not understanding that the job of the police was to protect the rich”, it comes as a pleasant and buoying surprise to find that Ibrahim and his team are good, and, at times, even ingenious, opponents of injustice. That is not to say that they themselves do not also stray from what is strictly lawful, adding to the novel’s dystopian air.  Amaka also recruits indomitable women (Naomi, Chioma, Eyitayo, Florentine, Funke) in her single-minded hunt for the villainous Malik. Along the way, she becomes ensnared in the bloody battle for the governorship of Lagos, and proves in this sphere of high-stakes politics also, to be a formidable foe for even the most powerful of players.

One of the strengths of the novel is its evocation of Lagos as an Afropolitan city of great diversity and simmering political, ethnic and class tensions. Adenle is as dexterous with descriptions of the horrorific scenes one may encounter in Oshodi Market as he is with his satirical sketches of billionaires’ mansions in the once colonial enclave of Ikoyi. To emphasise the stark economic inequalities of Nigeria and the shallowness of the rich, he consistently offers information such as the brands of luxury vehicles including the ill-fated Embraer Phenom 300 jet of the prologue, and references to Manolo Blahnik sandals and a Hublot Fusion King Gold watch. Interspersed with these gross symbols of wealth are portraits of young men on okada (motorcycles) with AK-47s slung on their backs, beggars, street hawkers, dingy bars, billowing agbadas, and the demotic pidgin of the streets competing with the relentless roar of traffic. While not evoking the pathos of a megacity that is tragically and abjectly riven as, say, Chris Abani’s GraceLand or A. Igoni Barrett’s Blackass manage to achieve, given the difference in genre, the overall effect of Adenle’s deployment of setting is a very real sense of being immersed in a thrilling kaleidoscope of colour and a cacophony of sound, whilst simultaneously descending into the dark and demonic pits of a modern-day hell. 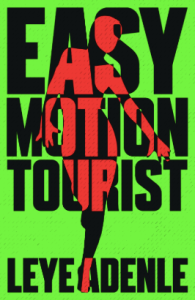 Another Amaka novel by Leye Adenle, released in 2016.

Characterisation in this novel is varied and bold but often it lacks the carefully devised backstory that imparts depth and substance, or the interiority that renders a character’s actions plausible or sympathetic. Information about Amaka, its detective heroine, is bitty and superficial, and often details about a character are contradictory, such as the short-lived gubernatorial candidate, Chief Adio Douglas. Initially he is described as occupying an established position in the upper echelons of Lagosian society due to his being a former central bank director and finance minister. Later he is described as an outsider who had only recently returned from his life in the USA where he had sold mortgages. A secondary character, Naomi, is afforded a detailed backstory, and thus the motivation for her extreme courage in the face of grave danger is explained. With Amaka, the reader craves a similar multi-dimensional rendering of character in order to understand her motivations and fully identify with her crusade. Where Adenle does excel is with the figures of the “godfathers”, Otunba Oluawo, an octogenarian kingpin of the ruling party, known as the “Lion of Yoruba land”, who is said to control everyone and everything, and Prince Ambrose Adepoju, supporter of the opposition. Indeed, these characters, although distinct, are both larger-than-life but terrifyingly real in their familiarity.

Most unusual and gripping, and, perhaps unique to this novel, are the surprising and unlikely alliances struck between characters throughout the course of the narrative as more and more crusaders for justice mobilise against the immoral rich and powerful. A motley army of truth-seekers, democracy-defenders, and human rights protectors is assembled by Amaka, and while still outnumbered and outranked, they constitute hope for Nigeria and the continent. In this way, the reader is relieved of the noir pessimism which permeates this text despite its vivid vignettes and thrilling mise en scène. Perhaps ultimately, this is the most positive theme in an otherwise dark text – that strength in unity is the only way to defeat those who selfishly aggrandise, oppress, and exploit.

When Trouble Sleeps was published in September 2018 by Cassava Republic and is available online and at major book retailers. Easy Motion Tourist (2016) is similarly available. Adenle’s work also appears in the two anthologies Sunshine Noir and Lagos Noir and he has written and recorded work for BBC Radio 4 and the World Service. He was born in Nigeria and now lives and works in London as a writer, actor, and dabbler in stage craft.

Sam Naidu is an Associate Professor in the Department of Literary Studies, Rhodes University, South Africa. She is the co-ordinator of the Intersecting Diasporas Research Group. Her main area of teaching and research is literature of migration and diaspora, especially of the African, South Asian and Latin America diasporas. She also teaches and researches crime fiction.