Go through the gates of the Xaranta Dhaqanka, the Hargeysa Cultural Centre in Somaliland’s capital, and you’ll encounter a courtyard of small buildings. To your right is the Cultural Centre’s library, housing a wide-ranging collection including academic text books, African politics, theory, memoirs and an impressive variety of African literature titles. To your left are the centre’s administrative offices, an art gallery and a coffee stand. Ahead of you is a newly-constructed, freshly-painted roof under which are lined rows and rows of plastic chairs leading up to the raised stage. At the opening of the Hargeysa International Book Fair’s 11th edition, this compound is buzzing with activity. Around 8,000 people are estimated to attend over the five days of the fair. Book stalls are stacked with Somali fiction and non-fiction titles, young people fill the audience and the courtyard and the stage is occupied periodically by classic Somali poets, young folk dancers, government ministers, writers, filmmakers and creative producers from Somaliland and across the African continent.

In a city which less than 30 years ago saw a brutal war and the displacement of hundreds of thousands of people, the existence of the book fair is no small feat. Still without international recognition or any foreign aid, Somaliland has been rebuilt by its people to become a relatively safe country with a growing economy and – albeit with its critics – a functioning democratic system.  Somalilanders are fiercely passionate about their country and their identity, a sentiment expressed by almost all I met during my short trip to Hargeysa. This feeling is nowhere more evident than in the opening ceremony of the book fair. Edna Adan, a midwife, maternity ward founder, former minister and undoubtedly the country’s most celebrated person, reflects on the years of the war: ‘to destroy a people you have to destroy their heritage, culture and customs’. Festival founder and director Jama Musse Jama makes the case for art and culture, naming these as the ‘foundations of state building’. The book fair, organised by the Red Sea Cultural Foundation and Kayd, is partly a cultural event, partly an exercise in international diplomacy. It is opportunity to celebrate the nation for Somalilanders themselves, and showcase what the country has to offer to an international audience. 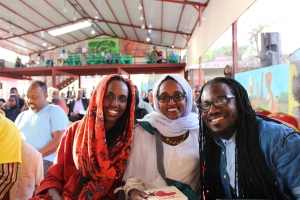 The festival has a pan-African sensibility, and plays host to a ‘guest country’ from the continent each year, from which writers are invited. These have included Djibouti, Malawi, Nigeria, Ghana, South Africa, and in 2018, Rwanda. Amongst the guest contributors at this year’s festival, I meet the prolific writer Chuma Nwokolo, who has come to discuss his recently published novel The Extinction of the Menai, a tale of land and language in the Niger Delta. Writer Agazit Abate and filmmaker Taye Balogun are here to speak about storytelling as a way to help us understand ourselves and our communities. Abate shares her memories of growing up the child of Ethiopian immigrants in Los Angeles, painting a vivid picture of youth amidst a turbulent and radical political era. Balogun speaks with clear intention about using filmmaking to get young people into political spaces, and telling stories that engage rather than entertain. Sheltered in a corner of the compound from the dusty breeze that sweeps through Hargeysa each morning, I sit with Ethiopian writer Maskarm Haile to learn about her remarkable journey as a solo woman backpacker who travelled the famous Cape to Cairo route. Her stories of tricky situations and the unexpected generosity of strangers are funny and energizing, and together create a fascinating account of Somaliland and its neighbouring countries. Comprising travel writing and memoir, her book Abysinnian Nomad marks the first book to document the route by an African woman.

As the organisers state, the fair aims to promote a ‘connected, open, creative and tolerant society led by wisdom, and not by emotions; a society that has survived within its own mechanism, culture, heritage and knowledge production’. Wisdom is the theme of the 11th edition, and the programme aims to investigate questions of leadership, positions of men and women in cultural production, and where ‘the radical transformation of the Somali society in recent times has deteriorated the essence of wisdom of the ordinary people?’ (HIBF website). The programme is an eclectic mix, presenting topic as varied as news magazines in Hargeysa, chieftaincy in South Sudan, plants of Somaliland, urban planning and a panel discussion on the ‘wisdom of women’. The majority of literary events are in Somali, including poetry performances and several book launches by young Somalilanders. Both in the organising team and the audience, young people seem to be in the majority at the fair. I meet Maxamuud Xusseen, 18 years old, who works the library at the cultural centre after school. He shows me two books on Somaliland culture and heritage that he has written and published, under the Red Sea Cultural Foundation’s publishing arm. Salma Sheik is here to promote and discuss her news magazine Somaliland Review. In a conservative environment in which the usual modes of reporting are discredited by many, her initiative is carefully and quietly challenging the status quo of journalism. 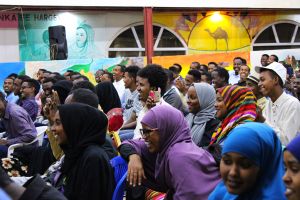 The festival highlight is a performance by some of the country’s classic poets, followed by a series of folk dances by the Hido Academy. Poets including Maxamed Cali Waji, Muuse Cali Faruur and Xildhibaan Dheeg take to the stage, and are met with enthusiasm in an audience packed with young people, sometimes doubling-over with laughter. It is amazing to see this interaction between the generations, and the pure enjoyment that the poets bring to this crowd. As the dancers begin their performance, some in the audience rise to their feet to cheer and dance. The atmosphere in the cultural centre is electric, and the excitement of the crowd is rising. Abruptly, the music is cut, and the MC announces that everyone must make their way to the exit and leave the cultural centre immediately. With stern efficiency, security guards and police officers move the crowd out of compound. We are suddenly on the road outside, blinking in the dusty orange of car headlights, wondering what just happened.

The incident acted as a reminder of the conservative society in which the book fair operates. We later discovered that the organisers themselves took the decision to end the event: needing to maintain a careful balance between complying with the authorities and providing a free and open space for their audiences. In this context, there are those striving to revive and celebrate the heritage, culture and customs of which Edna Adan spoke at the opening ceremony, and those who are pushing boundaries of writing, art and self-expression within a tight environment. The book fair’s achievement is in welcoming and incorporating both.

View the livestream of all events: https://www.facebook.com/XaruntaDhaqankaHargeysa/videos/

Caitlin Pearson is fundraising manager for the Royal African Society and also works on programming and production for Africa Writes festival held in London. She previously worked at the Centre for African Studies, based at SOAS, and at the Canon Collins Educational and Legal Assistance Trust. Caitlin holds a BA from the University of Birmingham and an MA from SOAS, both in African Studies. Her research interests span literature, screen media, representation, class and disability and her published research includes Representations of a ‘black middle class’ in South African Film (2017) and How to blog about Africa: travel writing in the digital age (2014). @AfricaWritesUK africawrites.org

The Red Sea Cultural Foundation and Kayd also curate Somali Week Festival which kicks off today with a programme of events over the next week across London. Highlights include the Somali-British play Arawelo which is being performed at The Broadway Theatre on Monday 23rd and Rich Mix on Tuesday 23rd October, a launch on Wednesday 24 October at the Poetry Translation Centre of a new Somali/English anthology and an event at the Southbank Centre on Thursday 25 October showcasing a new generation of Somali women poets.  Find out more on the Kayd website and download the full programme here.