The Brittle Paper Awards is back for the 2018 edition. And, the nomination process is open to the public. Anyone can nominate works of fiction, nonfiction, poetry, and essays or think pieces for consideration by Brittle Paper’s editorial team. 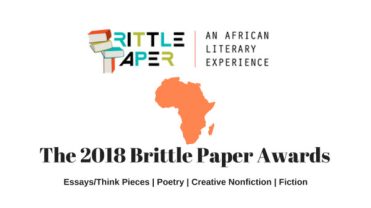 The Brittle Paper Awards was established in 2017 to mark the seventh anniversary of the blog. It is a way of highlighting the best pieces of online writing by Africans—an avenue for showcasing the range of thinking, stylistic innovation, and exploration of subjects happening on the literary scene. It is also an opportunity to celebrate writers who are leveraging digital technology for creative work, and of course the platforms that publish their work.

Read the pieces on the shortlists HERE.

While for the inaugural Awards, Brittle Paper’s editors depended on their knowledge as curators of African literary production, knowledge from monitoring the African literary scene closely, and from observing how much impact these writings have had on individuals and online communities, for this second year, nominations are open to the public as well so as to not miss out on anything remarkable.

HOW TO MAKE A NOMINATION

Send an email to brittlepaperawards@gmail.com with the header “BPA 2018 Nomination.” The email is to contain only the following:

Here is a sample nomination email:

A nomination email can contain more than one nomination.

The shortlists will be announced in September.

Find out more about the 2017 Brittle Paper Awards HERE.

See the call for nominations on Brittle Paper HERE.

Like Loading...
‹ Building an Archive – Voices from the Panel “Loving Womxn: Deliberate and Afraid of Nothing” at the 2018 Africa Writes Festival
Event: The Africa Centre Summer Festival (18th August, London) ›