We are delighted to announce that Harvard Book Store and the Hutchins Center for African & African American Research will welcome renowned Kenyan writer and scholar Ngũgĩ wa Thiong’o—author of the acclaimed novel Wizard of the Crow—for a discussion of his latest book, Wrestling with the Devil: A Prison Memoir on Tuesday 17th April at 6pm.

Ngũgĩ wa Thiong’o will be in conversation with Mũkoma wa Ngũgĩ. 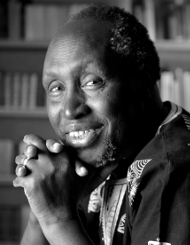 Wrestling with the Devil
Ngũgĩ wa Thiong’o’s powerful prison memoir begins literally half an hour before his release on December 12, 1978. In one extended flashback, he recalls the night, a year earlier, when armed police pulled him from his home and jailed him in Kenya’s Kamĩtĩ Maximum Security Prison, one of the largest in Africa. There, he lives in a prison block with eighteen other political prisoners, quarantined from the general prison population.

In a conscious effort to fight back the humiliation and the intended degradation of the spirit, Ngũgĩ decides to write a novel on toilet paper, the only paper to which he has access, a book that will become his classic, Devil on the Cross.

Written in the early 1980s and never before published in America, Wrestling with the Devil is Ngũgĩ’s account of the drama and the challenges of writing fiction under twenty-four-hour surveillance. He captures not only the excruciating pain that comes from being cut off from his wife and children but also the spirit of defiance that defines hope. Ultimately, Wrestling with the Devil is a testimony to the power of imagination to help humans break free of confinement, which is truly the story of all art.

“In his crowded career and his eventful life, Ngũgĩ has enacted, for all to see, the paradigmatic trials and quandaries of a contemporary African writer, caught in sometimes implacable political, social, racial, and linguistic currents.” —John Updike, The New Yorker

Tickets: $27.00 (available online only, inclusive of a copy of the book) ON SALE NOW. For tickets and further information: http://www.harvard.com/event/ngugi_wa_thiongo/

The event includes a book signing

Ngũgĩ wa Thiong’o
Ngũgĩ wa Thiong’o was born in Limuru, Kenya in 1938 and is one of the leading writers and scholars at work today. He is the author of Wizard of the Crow; A Grain of Wheat; Weep Not Child; The River Between; Petals of Blood; and Birth of a Dream Weaver. He is currently Distinguished Professor of English and Comparative Literature at the University of California, Irvine.

Mũkoma wa Ngũgĩ
Mũkoma wa Ngũgĩ is an Assistant Professor of English at Cornell University and the author of The Rise of the African Novel: Politics of Language, Politics and Ownership, the novels Mrs. Shaw, Black Star Nairobi, Nairobi Heat, and two books of poetry, Hurling Words at Consciousness and Logotherapy.  He is the co-founder of the Mabati-Cornell Kiswahili Prize for African Literature and co-director of the Global South Project Cornell.  In 2013, New African magazine named him one of the 100 most Influential Africans. For more see, http://www.mukomawangugi.com.