Home › Reviews & Spotlights on... › Self-help as Warfare: Lola Akande’s campus novel and What it Takes to be a Woman who Succeeds on a University Campus

Self-help as Warfare: Lola Akande’s campus novel and What it Takes to be a Woman who Succeeds on a University Campus

The title of Lola Akande’s novel What it Takes can be interpreted in more than one way. The novel can be read as a celebratory narrative of the extraordinary achievements of the protagonist, Funto Oyewole, as she faces the challenges and difficulties on her path to completing her PhD thesis and becoming “Doctor Oyewole”. She has, one might say, “what it takes” to overcome the many obstacles in her way. As we near the end of the novel, she prepares for her graduation in the company of a man who has many of the qualities she desires in an equal partner. Yet this optimistic reading of the novel as an account of how she comes to have it all hides the darker meanings of the title. The novel is also an account of the high cost to her, and of what it took, and takes, for a woman academic to achieve her goals.

Akande’s first novel, In Our Place, similarly featured a heroine about to graduate, and the author has described that protagonist’s dilemma in an interview with the Nigerian newspaper Sun: “She has two things in mind: looking for a job or getting married. The novel takes the reader through her journey as she tries to find a job and, in the process, she discovers that she needs more than her certificate”. This interest in graduation not as the successful end point, but instead as a crisis moment, also characterises What it Takes. The back cover of the novel warns the reader that What it Takes is not a simple success story: “The heroine, Funto Oyewole, a middle-aged and ambitious woman, tells her own story about her dreams, hopes, aspirations, enthusiasms, disappointments and misery as a doctorate student, and how her zeal, high energy and enthusiasm are gradually replaced by frustration and despondency, which hasten her aging process, as her hope of earning a PhD through hard work becomes increasingly elusive”. 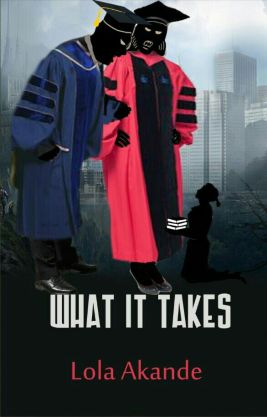 This, in other words, is not merely a narrative of the making of a self through hard work, nor of a woman who improves herself in the mode of the self-help guide, and so captures the heart of a good and marriage-loving man.  Stephanie Newell has written (in a rare academic analysis of this immensely popular genre) that West African self-help literature is disproportionately “preoccupied with the theme of marriage” (2008: 15). Akande’s novel certainly shares some of the conventions of self-help writing, and the reader is happy with her about Shettima, the man she meets: he supports her, treats her as his equal and is devoted to her. But the version of self-help and self-care that is developed in the novel is more challenging than this model of the search for romance can accommodate.

The novel is a multi-layered inspirational tale, mapping the forms of self-care and self-improvement that self-help genres desire to cultivate in readers. But these regimes of self-improvement are at times inflected with overpowering loneliness and the revelation that self-reliance and self-care are often states of despair and anger, rather than of higher consciousness.  At moments in the novel, Funto’s morning routine during which she prepares herself for the day is described in ways that make clear this is not simply a beauty protocol, but instead a courageous form of preparing herself to face the world wearing battle armour.  The scenes where Funto greets her own reflection in the many mirrors in her bedroom show us a woman who insists on seeing herself through her own eyes, rather than a woman preparing herself as sexual commodity for the gaze of others. These moments evoke for the reader her inner strength, and encourage us to emulate her.

A similar positive mirror is her loving and devoted friend Folake, who lends her clothes and an apartment, and enables and supports her. That the friendship with another woman is for most of the novel the main support Funto receives proves that this novel does not see self-help only as a road to marriage, but is instead invested in the solidarity between woman friends, and in the ways in which women can survive and succeed through the support of communities of other women. Self-help here thus has an activist agenda. As Sara Ahmed has written, selfcare is warfare, and not a mode of becoming ever more compliant with gendered norms of marriageability.

Placing the novel against the backdrop of a university is inspired, as the campus novel has built into it clear temporal and developmental time-lines, and a narrative arc that leads the reader to expect certain milestone will be reached. Hard-working Funto is faced with many forms of disappointment and injustice, while the reader witnesses and even gets to read her literature survey. Her supervisor is a great enthusiast for European and North American theory, and we read an impressive short survey of the main ideas of many of the thinkers the supervisor regards as crucial to read. The sense of outrage at her lack of advancement increases, as in the novel we have clear evidence that she has done everything possible to deserve her degree. Akande has written a courageous book, documenting many of the challenges faced by graduate students, whose supervisors are often tormentors rather than mentors.

Jonathan Haynes has commented on the prevalence of the university campus as location in Nollywood films. In his chapter on these campus films in Nollywood: the Creation of Nigerian Film Genres he shows that corrupt lecturers are a common and recurring trope in Nollywood depictions of campus life (267). But Haynes points out that although lecturers are notorious for coercing students to have sex with them, the threat of sexual violence in Nollywood more frequently comes from fellow students. The connections between campus and wider society are fuelled in Nollywood by the desire for commodities and lifestyle goods (277) which need to be financed. The desire for and procurement of these goods, argues Haynes, drives the plot in many of the films.  Haynes typifies the Nollywood tropes of student life: “Good students are ambitious for a better life but accept the delayed gratification. They trust in institutions and work hard. The bad ones want immediate gratification and understand the campus as a field for launching careers based on using what they have: the capacity for sex or violence” (277). This is a very productive way to read campus novels too, and to some extent Haynes’s model fits What it Takes, but with one important difference: Funto stops believing in the institution, and her lack of advancement proves that it is an empty promise that hard work is enough.

This crisis of faith is the crisis that drives the novel, and which shows the reader the need for more resistant analyses of institutional life. In the novel it is those students who sell out to the system who succeed, and hard-working and resilient Funto against whom barriers are thrown up because she refuses to pay for her degree with sex or bribes. Through Funto’s eventual success, and in particular when we read about the start of her career as a university lecturer and a supervisor to a new generation of students, we see the possibility of creating a new and more just world.

While Akande’s novel is set on a Nigerian campus, with all the historical and current challenges facing higher education in this country, the sexual and gender-based threats that are endemic to academia are internationally documented. In the UK, Sara Ahmed’s very public resignation from Goldsmiths, University of London, and her many feministkilljoys blog posts and other writings on sexual predators, have brought to the surface something many of us know festers under the surface in higher education institutions. The recent edited collections Surviving Sexism in Academia: Strategies for Feminist Leadership and Inside The Ivory Tower: Narratives Of Women Of Colour Surviving And Thriving In British Academia make significant interventions in these discussions in the UK. Caroline Mose and Dan Omanga have recently written a piece about the Kenyan academy, “No easy walk for female academics in our varsities”, documenting similar institutional violence to women academics. Akande’s novel is written in a realist mode, and like these activist archivists of injustice, she documents the various challenges facing women in the academy, and barring the road to success.

Many of the Nigerian reviews of the novel have noted the fact that the author’s biography shows many similarities with that of Funto, and Akande has not denied that the novel is at least in part a form of real-life testimony. The novel charts the many obstacles to completing a PhD, and in parallel fashion Akande has spoken of the challenges to getting her novel published. The novel thus charts a double achievement: that of Funto, for graduating as academic Doctor, and Akande, for publishing this novel. This is the way activist self-help genres create their readers as well as their writers.

Accompanying an interview in the Nigerian Sun newspaper, we see a picture of the academic and author Dr Lola Akande in her office at the University of Lagos, smartly dressed and positioned in front of a wall of books. Incidentally, Sara Ahmed’s photograph which accompanied her resignation interview showed her in a near identical stance: confidently positioned in front of a wall of books. This is the way that, through reading and writing their challenging books, a better future is made.  As Sara Ahmed has written on her blog post about selfcare as warfare:  “We reassemble ourselves through the ordinary, everyday and often painstaking work of looking after ourselves; looking after each other.” Lola Akande’s Funto deserves a sequel, showing us the ways forward to a life as a different kind of academic and mentor: a life that includes these daily acts of warfare that are looking after ourselves, looking after others.

Jimoh, Michael. 2017. “The university as narrative canvas in Lola Akande’s What it Takes” in The Guardian Arts Section 16 April. https://guardian.ng/art/the-university-as-narrative-canvas-in-lola-akandes-what-it-takes/.

Omanga, Duncan and Caroline Mose. 2017. “No easy walk for female academics in our varsities” in The Standard 1 July 2017. https://www.standardmedia.co.ke/article/2001245531/no-easy-walk-for-female-academics-in-our-varsities.

Carli Coetzee is a South African born academic living and working in the UK. Her book Accented Futures: Language Activism and the Ending of Apartheid appeared in 2013, and she is the co-editor of the collection Negotiating the Past: The Making of Memory in South Africa.  Her current project is on blood and secrets. She is the editor of the Journal of African Cultural Studies.

Lola Akande is an academic and novelist in Nigeria. Her book What it Takes is available from Kraft Books in Nigeria. Akande’s first novel is In Our Place.