Home › Books › Woe and Womb: A Review of Stay With Me by Ayòbámi Adébáyò

Woe and Womb: A Review of Stay With Me by Ayòbámi Adébáyò

Image via The Guardian

When asked about the seeds of her novel Stay With Me, Ayòbámi Adébáyò likes to tell the tale of how Yejide and Akin—two characters she created for a short story—persistently stayed in the corners of her mind for two years, until she was moved to make them the married-protagonists of her novel in 2010. As readers, we also want to stay with these characters, from Yejide’s compelling opening sentence (‘I must leave this city and come to you’) through bearing the weight of woes that seem too much. The reader stays—bolstered on Akin’s belief:

‘If the burden is too much and stays too long, even love bends, cracks, comes close to breaking and sometimes does break. But even when it’s in a thousand pieces around your feet, that doesn’t mean it’s no longer love.’

Stay With Me is the story of a separated couple— set in the politically chaotic Ilesa, in the state of Osun, between 1985 and 2008—and is structured around alternative chapters told from the shifting perspectives of its two main characters. It is the story of a nuclear family built on the foundations of first love, and which crumbles in the face of four years of childlessness, followed by the consecutive loss of children. Yejide is nagged by a cast of extended family members, coupled with the forces of societal norms and expectations, and as a result tries everything from pilgrimages to medical consultations. Each taunt, and each try, is a blow to their marriage—and eventually, desperation leads the couple to making devastating choices. It is a story of succumbing to superstition for a splinter of hope; a story sieved through secrets, which are home to more secrets, and a story of suffering from sickle-cell disease. At once Gothic and a Greek tragedy—as read by The Guardian’s books editor, Clair Armitstead—this heavily-plotted page-turner shocks and saddens as it subverts societal expectations concerning man and woman, husband and wife, fatherhood and motherhood. The woman suffers taunts for her inability to mother children, but not once is the man’s ability to do so questioned: ‘Women manufacture children and if you can’t you are just a man. Nobody should call you a woman’, says Yejide’s mother-in-law. 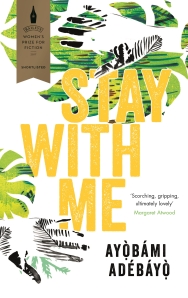 From her step-mother to the second wife, and her mother-in-law, several women push their way into Yejide’s marriage. The first to invade Yejide’s home is Iya Martha—the oldest of her father’s four wives—and Akin’s uncle, Baba Lola. ‘Even then, I could sense they had come prepared for war’, she remembers. At first, Yejide didn’t notice the next in line to impale her marriage: her husband’s second wife, Funmilayo—and the woman who made Yejide into iyale, a first wife. Yejide turns to her mother-in-law for help, the only woman she had ever called Moomi (her own mother had died during childbirth), but all hope is lost when the neither the new wife, nor she, is pregnant: ‘You have had my son between your legs for two more months and still your stomach is flat. Close your thighs to him, I beg you. … If you don’t he will die childless. I beg you, don’t spoil my life. He is my first son, Yejide.’ These women partake in unconsciously destroying the couples’ relationship, but none penetrate their marriage as painfully as Akin’s brother Dotun, who is at once home and hazard to the couples’ love, loss, lineage, and loyalties. Akin invites Dotun into his bedroom, and begs him to save his marriage and family—a desperate attempt on his part, and one that ultimately backfires.

As the narrative unravels, the trauma of barrenness, traditional patriarchal beliefs, and threads of her husband’s betrayal weaken Yejide’s body, but her fierce female spirit remains unwavering, and the tragedy comes to a close tethering onto hope. Stay With Me is a mother’s plea for her dying children, and a husband’s plea for a dying marriage. It is a novel you swallow too quickly, and with tears, and a novel that stays from the moment it situates itself on your literary landscape.

A week after it was first published (by Canongate Books in the UK), Ayòbámi Adébáyò’s debut novel was nominated on the 2017 Baileys Women’s Prize for Fiction longlist. Soon after, it secured itself on the shortlist of six. Adébáyò—mentored by Atwood and Adichie, and with an MA in Creative Writing from UEA—is “the fourth African ever to be shortlisted for the Baileys Prize,” reports Brittlepaper’s Otosirieze Obi-Young. Like Adichie in 2004, she is the only debut novelist on the list, he adds. With editions in Nigeria (Ouida Books), Kenya (Kwani?), US (Knopf), and others, and with an ever-propelling publicity team, it is needless to say that the Lagos-born Saraba Magazine fiction editor has found a space for her sensitive and stunning stories. The Baileys Prize winner was announced on 7 June, with many rooting for #TeamStay and an Adébáyò win.

Ayòbámi Adébáyò’s Stay With Me is published in the UK by Canongate Books, and in Nigeria by Ouida Books.

Sana Goyal is a doctoral student at SOAS, London, where she researches literary prize cultures in the context of select 21st century women writers of the African diaspora. She’s also a freelance books writer for Vogue India, and Mint Lounge.