Shaped by the African Union’s 2016 focus on ‘Human Rights with Special Focus on Rights of Women’, the ‘Africa Together’ conference intends to bring together thought leaders across fields to ignite critical discourse around the paradigm shifts contributing to the Africa we foresee. The day will include keynote addresses as well as panel discussions, exhibitions and performances by African artists. Panel discussions will explore the promise of a green revolution for Africa, the imagining of a decolonised education in Africa, the role of African voices in the telling of African narratives, and the role of business as well as the extractive industries in Africa’s inclusive growth, among other themes. Discourse will have a particular focus on harnessing the energies and talent of women across the continent in these efforts, towards a more prosperous Africa.

Over 350 delegates are expected to attend the conference, with leaders and students representing all 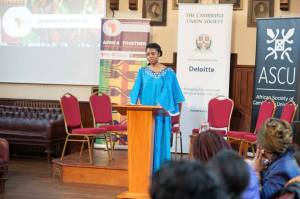 regions of the continent. The conference will provide opportunities for one-on-one engagement with inspiring guest speakers, participating organisations, academics and diplomats from across Africa and the UK, as well as authors and artists showcasing their work. There will be a networking occasion for participating organisations on the 11 th of June, the day after the conference, to connect with attending students and other represented organisations. On the conference day, lunch will be served by Eko Kitchen and Bedouin Cambridge. The event promises to be one of the largest and most diverse commemorations of Africa Day in the UK.

The ‘Africa Together’ conference is a collaborative effort between the African societies of Cambridge University and Anglia Ruskin University. In describing the event, ASCU president Halimatou Hima emphasised, “Africa Together is an invitation to deconstruct the headlines and critically engage with what is shaping the present and the future of our continent. It is also a moment to celebrate the successes, that will guarantee the attainment of our highest aspirations for the African continent and its Diaspora.” We hope you join us in this celebration of African creativity, innovation and triumphs.