Returning to screens across London this past November, the Royal African Society’s annual Film Africa festival celebrated and promoted filmmaking from various countries across the continent. In a colourful week of reunions, fresh faces and thought-provoking discussions, the many film strands together screened over 50 films, animations and documentaries. There was a distinctly self-questioning and future-focused feel to the films and their surrounding discussion, with many of them concerned with what today can tell us about tomorrow – and how that tomorrow can be more innovative, humane, and enriching. From coming-of-age visions of Ethiopia to the bittersweet success of refugees reaching their new countries, these five memorable highlights are sure to become part of the continent’s best and most diverse voices in film today.

French director Boris Lojkine’s first feature follows a Nigerian woman and Cameroonian man, during their dangerous journey across Northern Africa in an attempt to reach Spain from the narrowest point of the Mediterranean. Although the narrative arc is reminiscent of a number of more memorable films of the genre such as Philippe Lioret’s Welcome (2009), Lojkine’s drama is still a touching and tense first film. On the long, hard and difficult trek across the Sahara, Léonard strikes up an unwilling partnership with Hope. Negotiating the ruthless lifestyle of the ethnic camps with their opportunistic leaders en route, their relationship wavers between mutual dislike, dependence and eventual closeness. An uncompromising look at the emotional, economic and sexual exploitation suffered along refugee routes from Africa toward Europe, Hope is a clear-eyed but never hard-hearted story of companionship and desperation.

Lyes Salem directs, writes and stars in this drama about Algerian independence, with a cynical and insightful critique of Algerian foundational myths, at times used to justify single-party rule. We follow two men – one a modest idealist, the other quite the opportunist – in an exploration of how revolution was hijacked for money and power. Lyes Salem and Khaled Benaissa give standout performances in the two leading roles. Entrenched corruption and the suppression of ordinary peoples’ democratic desires under the rhetoric of patriotism and nationalism are no small tasks for any film to undertake to explore, and Salem at times loses the focus of the beginning of the film from his directorial seat. However, this year’s closing gala film The Man from Oran remains a must-see exposé of Algeria’s political history and its ongoing struggles with neo-colonial power structures.

A cynical and disillusioned reporter, Godwin (Oris Erhuero), finds himself swept up in a witch hunt upon his arrival in a West African village to cover a local festival. Attempts to save the accused girl’s life and resist the rife corruption and influence of false prophets turns this into a harrowing tale and meditation on the power and ills of religion, dogmatic morality and fear in communities. Based on the BAFTA-winning 2009 documentary, Saving Africa’s Witch Children, Yeboah’s affecting feature addresses the ongoing problem of child witch accusations widespread throughout Africa. With a largely local cast that gives strong performances and striking cinematography, The Cursed Ones garnered appreciation at Film Africa. 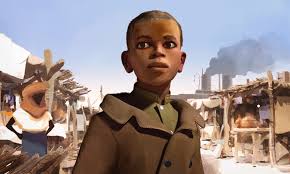 This French animation film by Simon Rouby tells the story of a young boy named Adama,
who sets off to find his brother, a rifleman with the French army during WWI. In an interesting mix of 2D and 3D animation techniques, Rouby’s feature premiered at the Annecy Animation Film Festival, where it won the festival’s Works in Progress competition in 2014. Adama’s quest from his West African village to Verdun takes him over the seas, to the cold dark of the North and the nightmare of battle in the front lines of World War I. The film gathered acclaim from critics for being the first animation to focus on the human and economic sacrifice of Africa during WWI, as well as for the innovative use of clay-sculpted 3D characters in tandem with beautifully hand-drawn 2D settings. Aimed at a young audience but certainly containing allegorical and historical elements an adult audience would appreciate, Adama also stood out in the programme for its highly localised production and talent; having created the entire project in a studio in the island of La Reunion, Rouby’s team of animators and collaborators were largely local and neighbouring islanders, highlighting the well-trained and prolific animation talent growing beyond the hub cities fuelling European and American film production.

Another to add to the list of memorable directorial debuts at Film Africa was Yared Zeleke’s tale of rural Ethiopian life and the yearnings of a young boy not quite able to find the family bonds he needs. Nine-year-old Ephraim lives with his aunt and her adult son Solomon after the dead of his mother and the absence of his father. When Ephraim’s lamb and constant companion, Chuku, is to be sacrificed, Ephraim is compelled to act. With fascinating and multi-layered female characters and a coming-of-age trajectory enriched through the characters’ and the landscape’s interwoven relationship, Lamb is both cinematographically memorable and communicative of the yearning for belonging, return, self-discovery and love of childhood. The country’s turbulent political situation is an unintrusive but present backdrop to Zeleke’s debut feature, demonstrating his burgeoning directorial style as one reminiscent of Abderrahmane Sissako in Timbuktu or Nuri Bilge Ceylan in Once Upon a Time In Anatolia, with their use of setting as a vehicle for non-verbal storytelling. A rich and touching work from a country with untapped potential in filmmaking.

ah Jilani is a graduate of the Master of Studies in English (1900-Present) from the University of Oxford and a BA (Hons) English from the University of York, with interests in African and South Asian anticolonial resistance film and literature. Her research has featured in Senses of Cinema (68, 2013), Life Writing (11:4, 2014), Postgraduate English (29, 2014) and Literature/Film Quarterly (43:2, 2015). She is a freelance writer for publications including Art Review, The Times Literary Supplement, Istanbul Art News and The Economist.