Home › Reviews & Spotlights on... › I Am Not Done with African Immigrant Literature

I Am Not Done with African Immigrant Literature

I get afraid, very afraid, when somebody, anybody, prescribes to me which books to read and not to read. When somebody gives me a template of what African literature ought to look like.

And boy! You can imagine the shock I got when I read an article on okayafrica.com written by the gifted Siyanda Mohutsiwa, in which she gave a prescription for African literature, authenticating some forms and denouncing another.

I’d just finished watching an interview with Dambudzo Marechera on YouTube, when a Facebook friend pointed me to this article in which the author pronounces her dislike of “African immigrant literature” and declares that she has, with immediate effect, stopped reading this genre because, she writes, “I couldn’t get over the fact that my first encounter with Alain Mabanckou’s work was a foot-chase in a Paris subway station (The Fugitive). I couldn’t take a single new story that demanded I imagine the streets of Haywards Heath (Aminatta Forna). And for the love of God, if I had to read one more story that ends with the African protagonist being whisked away to America, I was downright ready to spit!”

Is literature that features distant places other than Africa un-African? “Perhaps I had begun to truly believe that the importance of African literature was to connect us ordinary Africans to each other’s lives,” Mohutsiwa writes.

I wrote a novel some years ago which was set in a European city. It only had white characters (no Africans, not a single black person in it). I sent it to an agent in London. It was accepted. The agent sent it to a publisher. It was accepted and was on the waiting list for publication. But then something happened. The publisher discovered that I was African and he said, wait a minute, this is not African literature. Did you say the author is African? I am sorry, I can’t sell this as African literature.

See, the problem here is prescription. Why is it acceptable for a western writer to come to Africa and write about Africa without having people raise their eyebrows? Does an American writer who sets his novel in Kigali cease to be an American writer or does it make him any less American?

We are still describing African literature by content, so, an African writer becomes somebody who writes about Africa, while an American writer is simply a writer from America. One is defined by content while the other is defined by descent, and what did Dambudzo say? “That’s one of the problems Southern African writing will continue to have. Writers must work out a non-racial way of writing. We must develop emotionally and intellectually to the stage where it’s not the colour of the person that matters, but the fire which makes them unique as an individual. It can make one angry because you are reading a book that categorises everybody in terms of race.”

And what did Uncle Ben Okri say recently in the Guardian in his article titled, “A mental tyranny is keeping black writers from greatness”? “An anomaly of perception is often brought to black and African writers. They tend to be considered only important for their subjects. …. The black and African writer is expected to write about certain things, and if they don’t they are seen as irrelevant.”

I was reading in Copenhagen at a festival alongside Billy Kahora and Nadifa Mohamed when someone in the audience asked Nadifa, “But how relevant are you as an African writer when you live so far away from the continent?” I quickly sought for clarity. What did he mean by relevance?

See, my duty as a writer is to write. I am not a custodian of my culture. I am not a spokesperson for Africa. I am not a teacher. I am not one to “connect people through my writing.” As much as I may be all of these things, I am simply a writer. An artist. Writing is in the first place an art and it does not have any boundaries. I can set my stories in the galaxy just as I can set them in my home village in Katonda, in Malawi.

Isn’t that what Shakespeare the English playwright did? Setting Antony and Cleopatra in Rome and Egypt, Romeo and Juliet in Italy in Verona and Mantua, Much Ado About Nothing in Messina, a port on the island of Sicily and the list goes on. Did that strip him of his right to be recognized as one of the greatest writers to have come from England?

So what does the author of this article mean, when she says, “I cannot hide the small and perhaps arrogant joy that comes to me when I know that all I create is 100% inspired by my uninterrupted African life”?

We are making our works to be those that are, in the first place, laden with subject, vehicles that carry messages, a medium and a means to an end, yet literature is full and beautiful in itself.

Ben Okri once more: “Literature is the index of our intelligence, our wisdom, our freedom. We must not let anyone define what we write, what we see as worthy of playful or profound investigation in words. ‘The aim of art,’ wrote Aristotle, ‘is to represent not the outward appearance of things, but their inward significance.’”

And, “The first freedom is mental freedom. We have to seize the freedom to be what we can be, to write whatever we want, with all the mystery and fire of art. … Great literature is rarely about one thing. It transcends subject. The subject was always the least important element in works that have endured. Sometimes an important work has a significant subject, but it is usually its art, rather than its subject, that makes it constantly relevant to us.”

I was giving a lecture somewhere and in the course of the discussions, I asked the question, “What is wrong with our themes and topics? Why should we continue to write about Biafra when there are tons and tons of books on the subject?”

At the end of my presentation, as I walked out of the hall, an old lady stopped me because she wanted to tell me, “If it’s a good story, it’s worth telling no matter how many people have talked about it.” She was right. 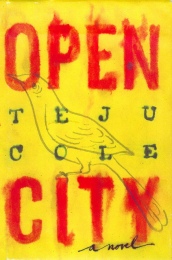 That’s why I am so much in love with Teju Cole’s Open City. The concept of the book is based on a foreign and western idea. In times of war, when a city felt that its capture was imminent, its authorities would sometimes declare it an open city. The city would drop its weapons and cease to defend itself. The enemies would just walk in without causing damage to either people or things. The concept aims at protecting the city’s historic landmarks and resident civilians from an unnecessary battle. The idea here is the appreciation of art.

Teju Cole’s novel, Open City, is almost plotless. Its primary focus is the art of literature and the appreciation of art in general. Oh! How I wish we’d captured this enigma—that art has no boundaries and that artists are citizens of the world. How I wish we’d come to a level of appreciating art more than anything else that accompanies it. How I wish we’d done away with all this boxing, all these templates, all these unnecessary prescriptions. How I wish!

Shadreck Chikoti is a Malawian writer and social activist. He was listed by CNN as one of seven must-read African authors. He has won numerous literary awards and was recently nominated by the Africa39 project as one of the “most promising African writers under 40.” An excerpt from his futuristic satire, Azotus the Kingdom, was published in the Africa39 project anthology in October 2014. Chikoti’s work has also appeared in the Caine Prize anthology To See the Mountain and Other Stories (2011). He lives in Malawi with his wife and children.