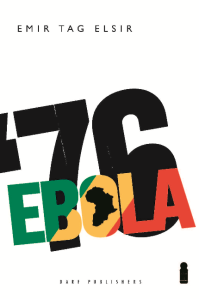 Ebola ’76 is a short novel by acclaimed Sudanese writer Amir Tag-Elsir, whose The Grub Hunter (2010) was short-listed for the International Prize for Arabic Fiction in 2011 and long-listed for the Arab Booker. Published originally in Arabic in 2012, the novella was translated into English in 2015 by Charis Bredin and Emily Danby, and it is this version that I review here. Short and quick-paced, like its eponymous hero—for ebola is portrayed as a predator stalking its victims to hunt them down—the novella strikes just the right balance between descriptive and figurative detail, naturalism tempered with absurdity. Steeped in the darkest of life’s situations and settings—an epidemic stricken small town through the lens of factory workers and street labour in its poorest part—as much as it is a tragedy alleviated with subtle satire and moments of comic relief, it remains deeply bitter.

As its title suggests, the book takes us to the year 1976, when ebola first made itself known to the world. Historically, the first ever outbreak of the notoriously fatal virus happened in the summer in Yambuku area, Zaire, now the Democratic Republic of Congo. It soon spread to the town of Nzara on the southern borders of the Sudan, now South Sudan. Although it was believed that Ebola reached the Sudan through a textile-factory worker who contracted it on a trip to Congo then returned across the borders to Nzara, the introductory statement stresses that the novella is not, however, the story of that worker. While the novella interweaves some of those historical and medical facts within its plot—Tag-Elsir is also a medical doctor—it opens with a brief prologue in verse that problematizes reality and fantasy:

In times of tragedy

The hand that greets a neighbour is real

The moon is no longer a distant fantasy

as if eyes, hands, the moon and ‘all’ that is around us is not real and will never become so, only ‘appearing’ real in times of tragedy. What problematises this further is that a note on the historical origins to the event follows, reminding us that it is a “work of pure fiction, bearing no relation to reality”.

The main character, Lewis Nawa, is a textile-factory worker in Nzara who is prompted to travel to Congo unexpectedly having received the news of the sudden illness and death of Elaine, the woman with whom he has been having a passionate extramarital love affair for the past two years. When he returns, carrying the virus after a lustful encounter with Kanini, a poor prostitute who works for herself (because no brothel agreed to hire her), he infects his wife, Tina Azacouri, a water seller on the street. Having been delayed on his trip by this casual liaison, Lewis returns to work after several days of absence, and before he knows that he has anyways been fired, he collapses in the factory. The sight of a man being hurried to hospital in a desperate condition is, to the people, so very common indeed that they don’t see it tragic until they know the cause later. Tag-Elsir describes what happens the year ‘hysteria’ spreads in the town among “the female population” (24), his take reminiscent of Gabriel García Marquez’s style and of Isabel Allende’s The House of the Spirits in which disease and decay of human bodies are part of the banal. In Ebola ’76, however, this is done not to a magical realist degree, although it remains absurd–in order to highlight that tragedies have become too commonly part of people’s everyday lives. Tag-Elsir balances the tragic with highly cynical comedy. Chapter Two, for instance, opens with comic relief, the narrator’s very matter-of-fact tone telling us about the ‘Man of the Year’ award invented by the factory foreman, Anami Okiyano, as a reaction to the International Women’s Day. Lewis, voted as Man of the Year, insists on being honoured in a public square with the local mayor attending although there is no local mayor to be had. When Lewis collapses, Anami insists that he must be saved, not because he is human, but because he is the Man of the Year. Ironically, Lewis, who brought the virus to the whole country, recovers, while Anami dies soon after he contracts it. 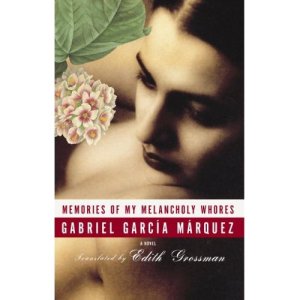 The narrator makes explicit reference to Marquez as the novella nears its ending: “Some lose their hope in Sudan – the world’s grain-store – when they find its fields empty, others declare themselves disappointed by Gabriel Garcia Marquez’s Memories of My Melancholy Whores” (61). This juxtaposition of disappointment in reality and in a fictional novella (The memories of Marquez’s hero were described as “disappointing” by Alberto Manguel, who found that the novella “never seems to extend beyond the mere smutty story”) echoes the gap between the ordinary poor people of Nzara and the European expatriates in their carefully protected compounds in the same town. When the virus spreads and they have to stay home, their concerns are shown to be trivial compared to the real sufferers immersed in the heart-breaking tragedies and chaotic death caused by ebola. The town has only two doctors, one of whom gets infected and dies. One doctor, Luther, remains, and his only assistants are, ironically, the survivors who recover! The hospital is unable to take all the patients, and so the treatment site becomes the square – the site of historical rebellion. It becomes known as ‘Ebola Square’.

This novella is not about telling a story, nor does it include one person’s story in particular, but it is about the network of histories intersecting personally, socially, and politically, across geographic, temporal and bodily borders. Borders of the body are penetrated in love, lust and in infection with Ebola, which pulls down the borders of the hearts and minds as patients lose control and reveal their most private secrets in the delirium of fever and deathbed awakenings. In Nzara, borders separate the European expatriate compounds from the rest of the town. One more of the absurdly painful paradoxes that runs through the novel occurs at the end, when the people finally see helicopters hovering above them, and think they are coming with medical aid to rescue them. The helicopters land instead in one expatriate’s back garden “on a so-called humanitarian mission” (63), to save those who are already secure from the spread of disease, whereas the ordinary poor people pile up in death—or life, for there was no time or medical care staff to make sure the patient is actually dead—in a mass burial site next to Ebola Square. Risk of infection, contagion and the ensuing death are the factors bringing together the different threads of the stories, and binding the diverse lives and backgrounds of the characters from both countries. Blood connects people from the diverse places and classes and this is dramatized in the novella to reveal how close they are despite all those borders.

The writer brilliantly portrays autonomous characters in action and although the narrator has his own point of view (in favour of scientific knowledge and against the popular ideas that the mysterious fatal disease is a mischievous work of sorcery), I disagree with Jane Housham’s assertion that

Tag Elsir’s apparent disdain for his characters robs his narrative of empathy and leaves the reader indifferent to the fate of Lewis, the blind guitarist Ruwadi, the washed‑up magician Jamadi and the rest. Empathy isn’t the only possible approach to such horror, but it’s the natural response for many readers and we may feel uncomfortable without it.

I feel instead that Tag-Elsir exposes layers of ironies between seeing, knowing and telling amongst the characters and the narrator involved on the one hand, and in creating and handling reality on the other hand. This is why rumour is a powerful tool in his narrative technique: it is meant to leave readers uncomfortable, not due to lack of empathy, but to force us experience for ourselves what lack of empathy, at any level, does. The novella’s end leaves us with several possibilities, Tag-Elsir reminding us “it could, in fact, have ended in any number of ways” (64). This is not exactly an open ending, but a multiple one, as he charts the path of those possibilities. Despite its 1976 setting, the recent 2014 ebola outbreak in West Africa seems to have invested the novella with another life, like that of its protagonist Lewis.

Réhab Abdelghany is Assistant Lecturer in the Department of English, Cairo University, and is currently PhD candidate in the School of English, University of Sussex, where she works on Nigerian, Egyptian-Nubian and New Zealand Maori literatures. She writes for Africa in Words, and previously wrote for several Anglophone newspapers and magazines in Egypt.