The Lagos International Poetry Festival 2015 was themed ‘Borderless Words’, aptly so in this period of migrations within Africa and across Europe. The organizers say that in the light of border restrictions, they choose to see words – and poetry in particular – as having the capacity to bridge racial, ethnic and language divides. 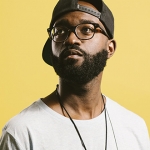 The topic of exile is never a pleasant one to broach, and this rang true for Titilope Sonuga, Nick Makoha and Inua Ellams. For the latter who was born and raised in Jos, Nigeria to a Christian mother and Muslim father, exile was occasioned by religious tensions which heightened after his father’s conversion to Christianity.

According to Ellams, poetry is blasphemy, and writing is too. When he writes, he fills the space of what could have been, and it feels blasphemous. 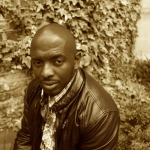 For Ugandan-born Makoha, flight was survival under the reign of Idi Amin. And for him exile took on novel meaning in the absence of his father – a meaning which was amplified as he grew older and lost the use of his mother tongue. For him writing involves using imagination to the fullest, ‘…you would not deny God this, and you would not deny yourself. Thus you must be willing to put in yourself, without any recognition, without any reward.’

Though Titi Sonuga’s exit from Nigeria at age twelve was nowhere near dramatic as the other two panelists discussing ‘How the Diaspora writes back’, she nonetheless conveyed a sense of loneliness and the need to belong, which as a pre-teen she wore like a second skin, and how this later led her to own her identity as a Nigerian and African. Of poetry she says: ‘Poetry was some kind of therapy; I always knew I wanted to say something profound in a very distilled, clean voice’. 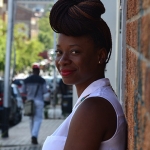 Varied as their personal stories were, the struggle to overcome racial and cultural barriers played as one unifying chorus in the narrative of their growth as poets. The sudden realization in a strange land that one is black, and that this oddity did not necessarily make life easier; this was the poker that stoked the hearth of their creativity. Makoha further describes this as an immigrant’s struggle to authenticate his metic experience: metic being the way one lives in a place without having the privileges of that land.

The issue of writing back was quite personal for Makoha and Sonuga, who acknowledged missing home even in the loss of language (Makoha), and returning to Nigeria, yet still writing in a bid to find the girl she was before she left for Canada (Sonuga).Ellams, meanwhile, insisted that he never ever felt he was writing back because the fluidity of his upbringing was such that home was always on his shoulders. He chooses however to write from a place of longing for a home one can no longer remember, or which probably never existed. I daresay a scary yet exciting place to write from, and a great springboard from which to connect the multiplicity of people who inhabit the current space we call earth.

As poets remain an emotional conduit for the transmission of ideas, other emotional and controversial discussions also took place. One such was the oestrogen-filled panel, discussing ‘Shifting Tides: Women in Society and Poetry’. In this discussion Lebo Mashile and Natalia Molebatsi decried society’s attempts to belittle the issues that women write about, by giving non-political matters the designation of ‘soft’.

As Lebo said, once she decided to stand up and speak about her experiences as a woman, her voice was already politicized, even before she understood the male-dominated literary scene of South Africa. But she had pride in herself and other female poets in her country who had kept their voices heard in the past decade and half, so as to pave the way for many other female poets to find their voices too.

Natalia on her part questioned who had the right to decide what issues were soft and which ones hard. She also insisted that at the core of the so-called soft female issues were societal issues; issues that border on human rights.

T.J. Dema (Botswana) and Jumoke Verissimo (Nigeria) both spoke of the need for female writers especially to document their work either electronically, or through traditional paper printing. In furtherance of this T. J. encouraged writers – specifically those of the spoken word variety – to learn and relearn the craft, so that their poems work well on the page and on stage.

This year’s festival was dedicated to the octogenarian poet, J.P Clark. The veteran reiterated that poetry is the height of the arts, and that it was a matter of design and discipline. Thus poets should take themselves and their craft seriously. 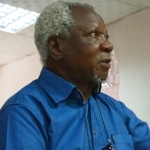 But the festival was more than discussion panels and enlightenment. Performances and readings were a major part of the festival, drawing crowds from Lagos and its environs. On hand to dazzle the audiences in the different festival venues were poets of the spoken word and performance variant, as well as poets who had undoubtedly excelled on the page.

A true straddle across the page and the stage, the festival also did its best to pick poets of varying ages who are undoubtedly at different points in their literary careers. This added in no small measure to the wide variety of themes tackled in the many poems rendered, and also lent spice to the performances. Other poets who also showcased their work as the festival drew to a close were: Grraciano Enwerem, Soonest Nathaniel Scholes, Chika Jones and Kemistree Bakare.

Having pulled the maiden edition off, the organizers of the 2015 Lagos International Poetry Festival – led by poet and performer Efe Paul Azino – deserve applause and a pat on the back. It is hoped that the next edition will bring a convergence of even more exciting poets and hopefully the dragnet of guests will extend beyond Africa to the Caribbeans, Europe and America.