After the dust raised in Nigeria by its publication had settled, I finally read There Was a Country, Chinua Achebe’s last published book, which centres on the Nigeria-Biafra civil war and Achebe’s personal experiences of and participation in it. But that is not where the story ends, because the book is also as much about Achebe’s “coming of age” story as it is about Nigeria’s long spell with bad, visionless leadership. Page after page, the author takes the reader on a historical journey through Nigeria’s smelly underbelly, unfolding the dirty linens one by one and revealing in shocking detail where “the rain began to beat” his beloved country.

It is more or less like being shown CCTV footage of a series of crimes that could have been prevented. With There Was a Country, I felt like a teenager seated at the feet of an elder, who painfully recollects how the community’s sacred shrine was wrecked by those who should have known better, while he watched, helplessly, as the sacrilege lasted.

“As we reached the brink of full-blown war it became clear to me that the chaos enveloping all of us in Nigeria was due to the incompetence of the Nigerian ruling class,” Achebe says. “They clearly had a poor grasp of history and found it difficult to appreciate and grapple with Nigeria’s ethnic and political complexity.”

Fifty-five years after independence from British colonial rule the country hasn’t found, it is sad to admit, its political bearing yet; if anything, corruption, ethnicity and the pursuit of self-serving agendas by the political class, which were in abundant supply pre- and post-civil war, have only bloomed.

“There are a number who believe that neither Gowon nor Ojukwu were the right leaders for that desperate time, because they were blinded by ego, hindered by a lack of administrative experience, and obsessed with interpersonal competition and petty rivalries.” 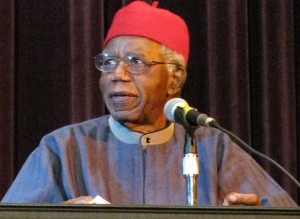 Achebe doesn’t solely blame Gowon or Ojukwu, then 32 and 33 years old respectively, for the war or events leading up to it; as far as he was concerned, their lieutenants also didn’t help matters. According to the widely celebrated author who passed away in March 2013, the advisers on both sides transformed “themselves into sycophants. Rather than encourage their respective leader on each side of the conflict to consider a cease-fire, they massaged their egos and spurred them on to ever-escalating hostility”.

Incidentally, I read There Was a Country days after the just concluded general elections in Nigeria. If Achebe’s book is a chronicle of the many daggers that have been dipped into Nigeria’s sides, then the 2015 elections are a testament to how little the country has changed in how it conducts its affairs in the more than five decades since independence. The campaigns by the contending parties generated unnecessary tribal missiles, signal that Nigeria is still very much divided along ethnic lines. Far from being a united nation, the very same sparks that fuelled the series of events that led to the first coup in January 1966, the counter-coup six months later, and the three-year war that sent Nigeria tumbling into a dark tunnel from which it emerged badly scarred.

As Achebe cleverly puts it, “part of the way to respond to confusion in Nigeria is to blame those from the other ethnic group or the other side of the country…one found some ethnic or religious element supporting whatever one was trying to make sense of”.

That Nigerian tendency to play the ethnic card resurfaced when There Was a Country was published in the fall of 2012. It immediately hatched a war of words between the “Yoruba camp” and the “Igbo camp” over Achebe’s supposedly biased take on the role of Obafemi Awolowo, then the federal Minister of Finance, during the war. The former argued that the author chose to “turn history on its head” and by so doing mislead the public, while the latter wondered why the “apologists” can’t seem to see the cruelty in Awolowo’s decision to ban humanitarian supplies to the suffering civilian population in Biafra, which could have saved millions of lives.

But the feuding parties have done the Nigerian reader a disservice with their wrangling. Willingly or unwillingly, they succeeded in creating the impression that There Was a Country is largely about Awolowo’s actions or inactions, when in actual fact the book should be recommended reading for every Nigerian alive. All said, it is a literary guide for anyone who needs to understand Nigeria’s national dynamics and why the country continues to crawl when it should actually be in flight.

“There was enough talent, enough education in Nigeria for us to have been able to arrange our affairs more efficiently, more meticulously, even if not completely independently, than we were doing…Nigeria had people of great quality, and what befell us—the corruption, the political ineptitude, the war—was a great disappointment and truly devastating to those of us who witnessed it.”

On a personal level, I consider There Was a Country the best introduction to Achebe, a guidepost somewhat to some of his earlier works and the environment and encounters that shaped his world view. Unlike several thousands of people around the world, I have not read Things Fall Apart, his pioneering debut novel. I did try to once or twice, but I could never go past the first two pages—there was something about the narrator’s voice and the story’s setting that just didn’t draw me in. I have never made any effort, before or after those attempts, to read any of his works—until I picked up There Was a Country. This time around, I didn’t have to struggle with the author’s tone and the “landscape” he has chosen to paint.

For someone who has toured the National War Museum previously, the book has also helped me to fully understand the main characters of that tense period in Nigeria’s history, in addition to answering a couple of questions I have had in mind these past many years about some of them (the Biafran flag, its currency and anthem, and what became of Col. Ifeajuna, among others).

After almost three years of combat and trying unsuccessfully to win international support for its cause, the Biafran leadership had no choice but to give up the fight, surrendering to the federal government in January 1970.

“In the end, Biafra collapsed. We simply had to turn around and find a way to keep those people still there alive…We had spent nearly three years fighting, fighting for a cause, fighting to the finish…for freedom. But all that had collapsed, and Biafra with it.”

It’s impossible not to feel Achebe’s grief in this crisp summation of the 30-month period armed combat, owing to his knowledge of the millions of avoidable deaths (women and children mainly), and the destruction of many towns and cities across the short-lived Biafra, for which he served as roving ambassador; plus he doesn’t hide the fact that he wished that the battle for the birth of Biafra had succeeded, freeing the Igbos from a “Nigeria that did not appeal to us any longer”.

All told, There Was A Country is profound tribute to a glorious past, one that Nigeria may never witness again, a heartfelt cry to compatriots to wise up and reclaim their dignity from a leadership that appears to forever revel in its own deceit and delusion.

Pelu Awofeso is an award-winning travel writer and culture reporter. Author of three books, he also blogs at wakaabout.wordpress com. Read more about Pelu’s travel writing in this interview with Africa in Words.

We are eagerly awaiting the official English-language release of Véronique Tadjo's (@veroniquetadjo) In the Company of Men this Thursday 15th April by @hoperoadpublishing. Drawing on real accounts of the Ebola outbreak in West Africa, this poignant, timely fable reflects on both the strength and the fragility of life and humanity’s place in the world. In a series of moving snapshots, Tadjo illustrates the terrible extent of the Ebola epidemic.
Make sure you catch up on the latest African literary and cultural news from March in our wrap! Link is in our bio to read 💫💫
Now on the blog, @uniofexeter students Isobella Norman, Leyla Mohammed and Leoni Fretwell talk Nostalgia (@jalada.africa), memory, and creative collaboration with journalist, essayist, filmmaker, and Managing Editor of Jalada Africa, Wanjeri Gakuru. Catch it via the link in our bio 🌟
Wise words for our #QuoteOfTheDay come from @nnediokorafor's Home, the sequel to Okorafor's Binti.
We have a double feature on the blog centring around Abdulrazak Gurnah's Afterlives (Bloomsbury 2020) in anticipation for the author's @africawritesuk Exeter Book Club event with Novoyu Rose Tshuma on March 30th. Judyannet Muchiri both reviews the novel and talks with Gurnah. You can catch the Q&A via the link in our bio, where you can then click through to the review.
We have a new a delicious review on the site! Tọ́pẹ́-ẸniỌbańkẹ́ Adégòkè (@literarygansta) brings out questions of what our feels might truly taste like in his evocative review of Iquo DianaAbasi's (@Dianaspeak) È̥fó̥ Rírò and Other Stories (@parresiapublishers). Link is in our bio 🍽️