Home › Research, Studies, Teaching › ‘This is literary achievement; where is yours?’ Radio Ghana’s ‘The Singing Net’ 60 years on

‘This is literary achievement; where is yours?’ Radio Ghana’s ‘The Singing Net’ 60 years on

On 28th January 1955 the Ghanaian song Yaa Nom Montie played for the first time on radio as the theme music of the country’s first literary programme, Singing Net.

The song’s composer, J.H. Kwabena Nketia, played the piano whilst Oto Boateng sung lyrics which invited the ‘good and noble listeners’ to be attentive as Ghanaian poems, short stories, plays and essays were transmitted. This post looks back at Singing Net on the sixtieth anniversary of the first programme being aired. In addition, 2015 marks eighty years of the Ghana Broadcasting Corporation (GBC), which began on 31st July 1935 as the Gold Coast Broadcasting System (GCBS).The project of considering literature in broadcast during the rise of nationalism is one that goes beyond (what is commonly referred to as) Radio Ghana. It is a multi-disciplinary study of interconnected broadcast cultures which focuses on Anglophone Caribbean, Anglophone West African and British broadcast histories (1945-1968). The research team is mapping networks of new literature and broadcast culture during this post-war era and interrogating the mediating role played by the BBC Overseas Service. The project, titled Decolonizing Voices: World Literature and Broadcast Culture at the End of Empire, is funded by the AHRC and housed at the University of Warwick.

The story of Radio Ghana and Singing Net begins in 1953 when the Colonial Government ordered a Commission to propose ways of improving broadcasting in the country. Until this time, Gold Coast radio relayed BBC news and entertainment programmes, played European music and featured daily programmes from London such as Calling West Africa. The Commission Board was made up of three BBC representatives and a Ghanaian engineering consultant. They proposed the establishment of GCBS to produce programmes of local content ‘in the spirit of independence’. It was suggested that BBC staff should be sent to Broadcasting House in Accra to develop news and entertainment programmes, train Ghanaian staff in engineering and journalism, and promote the purchase of wireless sets by the general public. 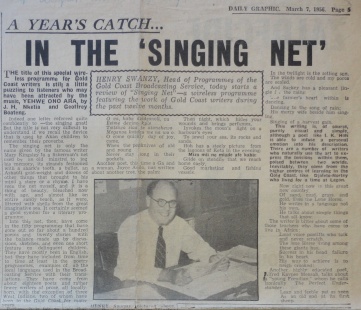 Swanzy is perhaps best remembered as having produced ‘Caribbean Voices’ for Calling the West Indies. Under his guidance (1946-1954), the literary programme became well known amongst Caribbean listeners, and gave a platform to writers such as Wilson Harris, Kamau Brathwaite, Derek Walcott and V. S. Naipaul. It is not surprising therefore that in planning GCBS programming Swanzy wrote to Millar stating emphatically that he wished to develop a new literary programme. ‘An aspect of the cultural situation which, I believe, offers great opportunity in an independent radio system’, he wrote, ‘is a definite policy for encouraging creative writers.’ Singing Net became that programme, Swanzy its editor, and Ghanaian writers, broadcasters, intellectuals and political thinkers its contributors.

Keen to attract contributors and listeners, Swanzy held writing competitions and wrote articles for the popular Accra-based newspaper, The Daily Graphic. In a two-part article published during Ghana’s first anniversary of independence he states that there had been more than fifty Singing Net programmes and reflects:

There are a number of writers who naturally use the art to express the [political] tension within them, poised between two worlds. Imaginatively, they come from the higher centres of learning in the Gold Coast…For those writers, mainly of prose, whose personal tensions are not so fine spun, the conflict is mainly expressed in the contrast between the fresh, clear life of tradition in the villages and the corruption of the big villages…

For contributor and listener alike, a limitation of the programme came in its use of English. As the language of the coloniser which became the official national language at independence in 1956, English was taught in government schools and only heard in urban areas. In a literary programme aimed at listeners for whom English was a second or third language it limited artistic expression and audience accessibility. ‘To broadcast in one language is to fail to broadcast in another, and that is always taken as a message,’ suggest Fardon and Furniss in African Broadcast Cultures (Oxford: James Currey, 2000). ‘Because the message of language choice may be divisive, a particular array of languages used on air may function as a symbolic mark of inclusion into a state, region or nation.’ This issue is an example of the tensions, successes and legacies of Radio Ghana and its literary broadcasts during the establishment of a new, independent nation – a history that forms the subject of my forthcoming book, ‘Stranger in the Home’.

In 1958, the anthology Voices of Ghana: literary contributions to the Ghana Broadcasting System, 1955-57 was published as a legacy to the first period of Singing Net. Edited by Swanzy, it was reviewed for the Nigerian Daily Times by Cyprian Ekwensi. He suggested that having achieved independence the anthology reads as Ghana saying to all nations struggling for political independence, ‘This is literary achievement; where is yours? … National Writers, take heart!’

I am certain that everyone who reads Voices of Ghana will agree that it stands as a solid examination of the achievement of a nation under the inspiration of a man who knew the importance to a nation of the (literary) printed word.