Home › And Other Words... › Anticolonial Visions: Revisiting Paul Gilroy’s The Black Atlantic in 2013

We are being abandoned by history. Few care to read or think about it. We live increasingly in a ‘post-historic’: age, in the endless proliferation of technological means and what Jacques Ellul has called ‘efficient ordering’, that is, technological procedures applied everywhere. Ours is no longer a culture of memory.

Few texts emerge from within the fortified walls of the university to go on and enjoy a life of their own. Often those works produced by social scientists and humanists circulate inside an intramural and professionalized academic circuitry, avoiding interaction with the public audience from which the historical and cultural materials under analysis are in fact found. For nearly two decades Paul Gilroy’s The Black Atlantic has defied such parochial tendencies, provoking intense debates on the transnational nature of black culture and the role of the black intellectual in modern society. Many scholars highlight Gilroy’s ability to show the ways in which the slave experience engaged and rehabilitated similar philosophical questions that were being mulled over by some of the primary figures of the European Enlightenment such as Hegel.

Yet, few invocations of The Black Atlantic give detailed attention to what Gilroy perceives as the anticolonial and anti-imperialist uses of the historical memory of slavery.  To fully appreciate not just the staying power of the text, but its actual relevance to our current socioeconomic predicaments, it is crucial to understand where the memory of slavery is made current, and how it can be used as tool of political resistance. To do such a thing is to illuminate the historical connection between current forms of racism, imperial war and economic depression alongside the function of the plantation economy in expanding the frontiers of capitalism.

That the plantation complex has dissolved is of less importance than the use of the political technologies and forms of knowledge that it generated and transmitted, in continued attempts to secure subject populations up to the Twentieth Century. In part, the continued relevance of plantation slavery is overlooked due to a version of American history that is as Eric Foner has called it, ‘the story of American freedom’: a narrative that asserts that freedom in the United States enjoyed exponential, relatively untrammeled growth from the Civil War until the Civil Rights Movement. However, the resistance to such a linear and stale view of the history of the United States persists by way of perceiving slavery as a metaphor for current forms of enslavement: prisoners as chattel, debt enslavement and structural adjustment, young men and women in the global sex trafficking trade and the list could of course continue.

This orthodox history of slavery, the version that believes its formal abolition corresponded to a disappearance of widespread racial terror, is pernicious, extensive and rearing its ideological head in the form of the current discourse of postracialism.  Alternatively, to view slavery in spectral terms, as a historical phenomenon that continues to shape the experience of black Atlantic denizens and other populations subject to imperial rule, allows for an understanding of historical change and continuity as coexisting phenomena. For Gilroy, much like C.L.R. James, it doesn’t end, it mutates.  To read The Black Atlantic in 2013 is to engage Gilroy’s view of black intellectual history at a moment in time where the vulnerability of black bodies to racial violence remains pervasive. The chorus of post-racial apologists will claim that such contemporary instances of racial terror are mere ephemera and of course point to the election of the first black American president as proof that racism is all but over. Yet, we now inhabit a world where the plantation complex has been supplanted by the prison industrial complex; where the racial terror meted out by Jim Crow white supremacists is now the work of domestic police; where the gentrifying forces of corporate capitalism facilitate the continued racial segregation of space, education and employment. Tragedies such as the murder of Oscar Grant by transportation authorities, the equally tragic fate faced by Trayvon Martin, the public execution of Amadou Diallo by plainclothes police, are but a few stark examples that such social antagonisms are increasingly becoming the rule and not the exception. For these reasons when revisiting texts such as The Black Atlantic we must, as informed readers, learn to let historical memory live. 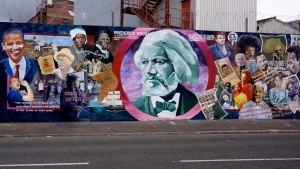 The Black Atlantic, for me, was an anticolonial model, a way of mapping the history of the African diaspora in terms of colonial resistance. For Frederick Douglass—his travels to Ireland illuminated the commonalities between the Irish liberation movement and the black abolitionist struggle. This transnational connection remains enshrined in Falls Road, Belfast where a mural is dedicated to Douglass and the African American struggle for freedom. For Du Bois, you have this development of an anti-colonial politics by way of his racialised experience in the United States, stoking his consciousness until you see it rise like a tidal wave in his texts, culminating in his exile and eventual death. What binds these figures together is the use of their local experience with racial subordination to generate a global anti-colonial consciousness. Thus, if we are to invoke The Black Atlantic as Gilroy did we must struggle to highlight the connections between the legacy of slavery and the acceleration of global capitalism as perhaps the greatest threat to the oppressed populations of our planet.

Armin Fardis is a Ph.D. candidate at Harvard University in the department of African and African American Studies with a primary field in English.  His research deals with the aesthetics of resistance in Caribbean, African-American and Irish anti-colonial literature and visual art.  In addition to his broader concern with the intellectual history of anti-colonial thought, he is interested in critiques of the prison-industrial complex found in the literary narratives of incarcerated anti-colonial intellectuals.