Home › Reviews & Spotlights on... › Saraba 14: Extracts from The Art Issue

Saraba 14: Extracts from The Art Issue

Following our interview with Emmanuel Iduma, and his insights into the founding and evolution of Saraba Magazine, we are excited to now be offering a taster of the magazine by sharing some extracts from the latest Art Issue. 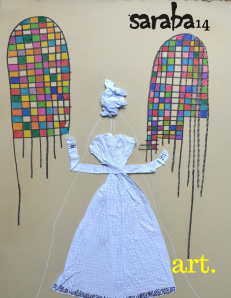 Emmanuel Iduma and Dami Ajayi describe the Art Issue as a ‘pleasure ride’ of ‘seeing and feeling’ and write in their Publishers’ Note:

Art is the reverberation of colour; art is approaching an image with ambivalence; art is looking at a story or a poem and feeling within oneself for emotions and experiences; art is the experience with yourself.

We understand the power of the image in a world over-zealous about representing itself. Our contributors helped us create a landscape of metamorphosizing colour, themes, and outlook.

We are very grateful to Saraba for allowing us to showcase two highlights from the magazine.

Amusing the Muse by Victor Ehikhamenor

Ehikhamenor is an award-winning visual artist, writer and photographer who draws influences from traditonal African motifs and religious cosmology.  He worked at NEXT newspapers as the creative director, as well as the Daily Times Nigeria as CEO/Editor-in- Chief.   He is the author of the poetry collection Sordid Rituals and his book Excuse Me! – a collection of satirical and humorous observations and essays about contemporary Nigerian life – was published by Parresia in 2012. 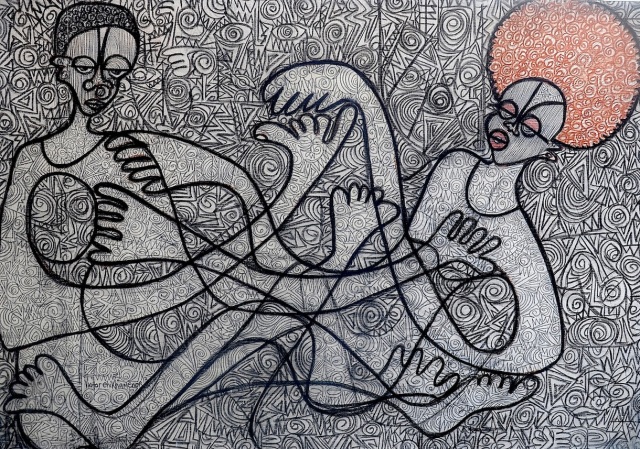 Thy Hypnotic Lover by Victor Ehikhamenor

Secondly, the work of Bunmi Oloruntoba with 3bute, which Emmanuel Iduma and Dami Ajayi argue ‘moves to claim a new territory for storytelling, for narratives that blur the distinction between the digital now, the analogous past and the speculative future.’

3bute [pronounced: tribute] is an online anthology founded by Bunmi Oloruntoba, that is devoted to the contexts often missing when African stories are reported. The mash-up platform lets artists collaborate with writers on 3-page visualizations of their stories and journalism. The visuals become pinboards readers can tag with context they think is relevant to the story. By being able to add context to these narrative and ―mashable‖ surfaces, the goal is to render, with reader‘s help, the developing world in a more engaging and immersive way.

The visualizations in Saraba’s Art Issue are for the story Virus, written by Ghanaian writer Jonathan Dotse. 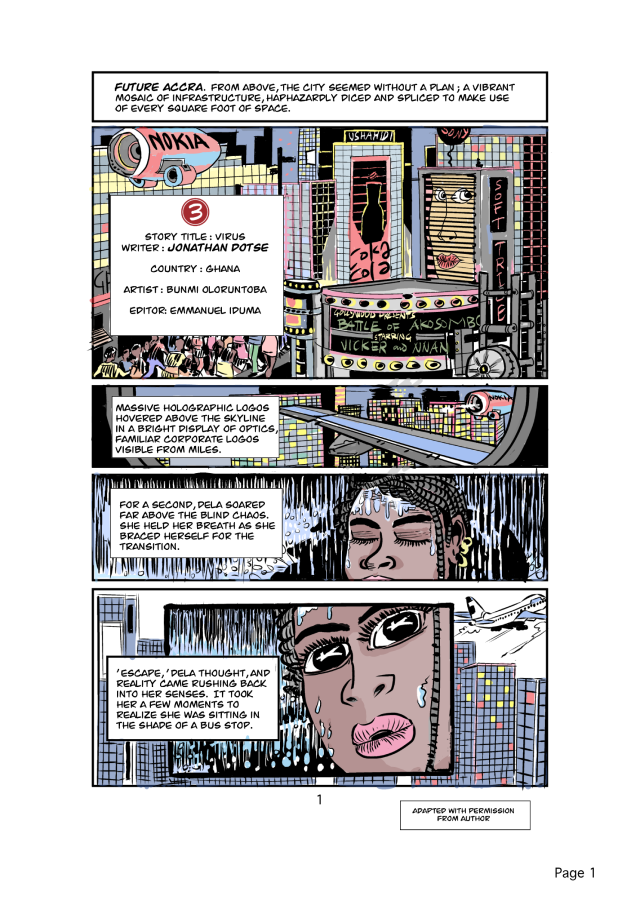 As part of the beauty and originality of 3bute’s work is the mash-up platform that allows readers to interact with stories by adding their own tags, instead of sharing all three pages of Virus we want to encourage you to read the rest on 3bute’s own website here.

Saraba and 3bute have recently announced they will be collaborating over the next year, working in partnership to encourage Saraba readers to vote, comment and contribute context to 3bute’s visualised stories.

These are just very brief extracts from a magazine which is full of images and writing that encourage different ways of thinking about art and the visual.  Download the full Art Issue in PDF from www.sarabamag.com and follow Saraba on Twitter @Sarabamag.

See our Q&A with Emmanuel Iduma – Writer and Co-Founder of Saraba Magazine.  A fundraising campaign for the publication of Gambit – the collection of short stories and interviews with new voices in African writing which Iduma discusses in the interview – has recently launched.  Show your support here.

Like Loading...
‹ ASAUK@50 events this week: 23rd & 24th October 2013, University of London and The British Museum
Opportunities and Deadlines for African Writers ›