This post is the first in an occasional series of writer profiles, looking especially at those working in African languages.

For readers and speakers of Yoruba, Akínwùmí Ìsòlá [pronounced Ishola] needs little introduction. A charismatic and stern-looking figure affectionately nicknamed ‘Honest Man’ for his predilection for speaking his mind, and with a fearsome list of occupations spanning playwright, film director, screenwriter, novelist, academic, literary critic, translator, actor, language activist and poet, Isola is one of the most renowned figures in contemporary Yoruba literature.

Now that film versions of his novels directed by Tunde Kelani are available (see more on this below), and with his historical dramas, Efúnsetán Aníwúrà and Olú Omo having recently translated been into English by Pamela J. Olubunmi Smith and into French by Michka Sachnine, the time is ripe for Isola’s work to reach an even wider audience.

Isola, who is based in southwestern Nigeria, has been writing prolifically for over 50 years. His literary works have included novels – The Campus Queen, Ogún Omodé, Ó le Kú, Saworoide – and a number of plays: as well as the historical dramas mentioned above, these include Madam Tinubu: The Terror in Lagos, Belly Bellows, Abé Ààbò, Kòseégbé, and Ayé Ye Wón Tán. He’s also published Àfàìmò, a collection of poems, (recently translated into English by Akinloye Ojo), and Fàbú, a collection of jokes.

As these titles suggest, though Isola is committed to writing in Yoruba, he has produced one or two works in English, which offer a useful way in to his work for non-Yoruba speakers.

But why read Isola’s work? Well, he’s funny and down-to-earth at the same time as his work tackles important moments in Yoruba history and contemporary life. He also has an incredible way with Yoruba – his novels and plays make full use of the dexterity of Yoruba, its distinct range of puns, jokes, proverbs and ideophones – and they’re full of earthy insults and plays on words.

For me, another good reason to read Isola is that he’s particularly interested in the history of women. Both of the plays translated by Pamela J. Olubunmi Smith centre on the lives of powerful nineteenth century female leaders, who have otherwise, Smith claims, ‘been written out of history’. Efúnsetán Aníwúrà tells how (the completely terrifying-sounding) Efúnsetán Aníwúrà administered an act of terrible cruelty to a slave, and was subsequently removed from power at the hands of the people, while Olú Omo explores how Tinúubú carried the Egba people to victory against Dahomey, and was awarded the Ìyálóde title as a result.

Isola has also made waves as a scholar and advocate of the Yoruba language. His work of literary criticism, The Modern Yoruba Novel, made an important contribution to Yoruba literary studies. He’s also translated Wole Soyinka’s Death and the King’s Horseman and Aké: The Years of Childhood into Yoruba.

And though Isola’s now retired from academic teaching, he continues to be a fervent advocate for Yoruba in literary, academic and everyday speech. Earlier this year, he gave what a convocation address at Adekunle Ajasin University entirely in Yoruba – a fairly radical act in a Nigerian university, where English is usually the order of the day on official occasions; years earlier, at Obafemi Awolowo University, he had been refused his request to give his inaugural lecture in Yoruba, even though he had been hired as a Professor of Yoruba literature and language. (As an aside, a friend of mine told me about how  fellow students laughed out loud at him [my friend] when he stood up on his first day at a Nigerian university and announced that he was studying Yoruba – it’s not hard to see why Isola proclaimed that ‘Yoruba language is currently sick’ earlier this year).

One of the best ways into Isola’s work, especially for non-Yoruba speakers, is probably through the films adapted from his novels: Koseegbe (1995), O Le Ku (1997), Saworoide (1999) and its sequel Agogo Eewo (2002), and The Campus Queen (2003). These films, directed by seasoned film maker Tunde Kelani, are considered by many to represent the more cerebral end of the Nigerian movie phenomenon, beautifully and carefully shot, with high production values. 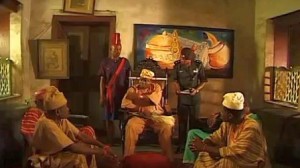 To my mind, the Isola films fall into two camps: on the one hand, there are the political dramas or thrillers. Koseegbe looks at what happens when a Customs Officer tries to make a stand against corruption and comes up against powerful enemies, while Saworoide is a satirical exploration of relations between traditional rulers and the people, as a newly elected king goes on a campaign to eliminate all his enemies. The films are well worth a watch for their evocation of the Yoruba past, and for their use of music, dance, language and costume as forms of expression. Agogo Eewo, the sequel to Saworoide, for instance, has some beautifully shot and lit scenes of dancing and drumming.

The other group of films is the campus dramas, which I have to admit are my

personal favourites, speaking as they do to the academic geek that I undeniably am. O Le Ku, which director Kelani has now put on Youtube in full, is a romantic campus drama with a tragic twist. While not a historical film per se, the action is set in the 1970s, and the film has become renowned for its glorious vintage 70s clothing and hairdos – and you can read a great discussion of how the popularity of the film sparked a revival of 1970s fashion (and a Google image search for ‘O Le Ku styles’ will reveal plenty more examples of short skirts, bold colours and huge head ties!)

The later film The Campus Queen similarly gives a snapshot of Nigerian campus life, set in the present era and exploring the tensions between rival groups on campus (with echoes of the rivalries between cults which caused havoc on some Nigerian campuses). While that may sound a little grim, the film is actually a lot of fun; it’s sometimes described as a musical, full of song and dance, and it begins with a music show, evoking the joys of being a student as well as campus life’s darker side.

And if you watch the films carefully, you may see the distinctive figure of the ‘Honest Man’ himself appearing in a cameo role…

Apologies to any Yoruba readers who have noticed the lack of sub-dots on the Yoruba words – unfortunately WordPress doesn’t display them very well.

Next in this occasional series will be a guest post on Amharic literature from Sara Marzagora in September.