As if you are not already aware from a veritable bombardment of email publicity, or as if I don’t already know you are not able to attend (sniff) some details of a workshop on the 16th April, PLUS NOTICE OF A SCREENING OF Michael Raeburn’s TRIOMF this Wednesday (14/03) at 4pm, at Sussex, in Fulton 214. Be really good to see you guys if you can make it along to any of these events – and please to pass on to anyone who might be interested in coming down for the day: 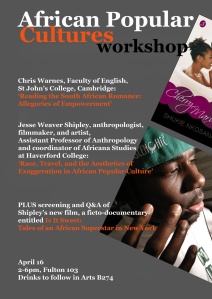 PLUS an exclusive session for Sussex students and staff
with internationally acclaimed Director, Michael Raeburn: 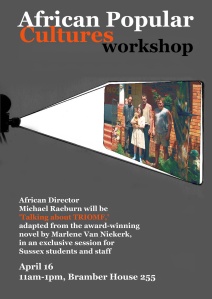 ‘Talking about TRIOMF’ (Winner Best South African Film at the Durban International Film Festival 2008).
11am-1pm, Bramber House 255.
There will be a full advance screening of TRIOMF next Wednesday March 14, in Fulton 214 at 4pm.

African Popular Cultures workshop
Chris Warnes, Faculty of English, St John’s College, Cambridge:
‘Reading the South African Romance: Allegories of Empowerment’.
Jesse Weaver Shipley, anthropologist, filmmaker, and artist who is Assistant Professor of Anthropology and coordinator of Africana Studies at Haverford College:
‘Race, Travel, and the Aesthetics of Exaggeration in African Popular Culture’.
PLUS film screening and Q&A of Shipley’s new film, a ficto-documentary entitled Is It Sweet: Tales of an African Superstar in New York (2012).

Further details below.
Both sessions, African Popular Cultures and ‘Talking about TRIOMF’ (morning and afternoon), are free. There is no need to register. Please RSVP indicating which sessions you would like to attend to k.e.reid@sussex.ac.uk.
Organised by Professor Steph Newell and Katie Reid.

Chris Warnes’s recent work focuses on texts from South African publishers and imprints who are responding to an increasing need in South Africa for ‘purely commercial women’s fiction’, such as: Sapphire Press – a romance imprint of the NB group’s Kwela Books, with the slogan WHERE TRUE LOVE REIGNS, associated with the True Love Book Club – whose romances capture South African stories of women who are ‘financially sussed, ready for love, and not prepared to compromise!’; and Nollybooks, established by publisher Moky Makura, and based on the popularity of the Nollywood film industry.  In the form of ‘bookazines,’ with word puzzles and a glossary, Makura describes a Nollybook as “a little bit of Sex in the City meets Mills and Boon”. Like Sapphire’s romances, Nollybooks notably feature South African characters and situations, written by South Africans, targeted at young, mainly black women, with the explicit aim of changing reading practices and re-popularising reading.

The reader of Sapphire romances:
• Is proudly black, dynamic, ambitious, enlightened, mature and sexy
• Seeks empowerment through relationship advice, career guidance and spiritual inspiration
• Respects and honours her cultural traditions
• Aspires to live a successful, fulfilling and dynamic life in a country that continuously presents her with interesting challenges and opportunities
• Generates her own income and seeks financial security and independence to realise her desires and enjoy her many choices as a consumer

Race, Travel, and the Aesthetics of Exaggeration in African Popular Culture

Screening: Is It Sweet: Tales of an African Superstar in New York (2012)

Jesse Weaver Shipley’s presentations examine issues of African diasporic movements in contemporary eras, transnationalism, and new technologies. Is it Sweet follows Reggie Rockstone Ossei, a celebrity in Ghana, and considered the founder of hiplife music – combining rap with local highlife popular music – in his move to the Bronx, NY.  Rockstone draws huge crowds at concerts and attracts attention everywhere he goes in Ghana but is not well known outside of his country. He inspired a young generation of musicians with hit songs of 10 years ago though has not made much of a musical impact recently.  When he performs for Ghanaians living in the United States, he is not sure what to expect. Is it Sweet follows his journey as he meets new fans, collaborators, and old friends. He explores what it is like to be Ghanaian in urban America. Music enacts a form of community as he works with young struggling musicians and shoots music videos. His former manager and producer have both relocated to the United States after living in Ghana. Their divergent paths guide disagreements about politics, race, and money. Reggie’s humor and irreverence shape this film’s intimate, and sometimes dystopic, story of an African superstar in New York.

Set in March 1994 South Africa, on the eve of the country’s first democratic election, TRIOMF details the routines of the dysfunctional, poor white Afrikaner family, the Benades, and their lives in the Johannesburg suburb Triomf (Afrikaans for ‘triumph’), a white working class neighbourhood erected over the rubble of the black township Sophiatown, from which hundreds of black families were forcibly removed by apartheid social engineers in the fifties. In this hilariously horrendous tragi-comedy, as a new world is born, two members of the wild, crazy and destitute family are destined to die.

Written by Raeburn, with Malcolm Kohll, TRIOMF is adapted from the extraordinary, landmark novel by Marlene van Niekerk, originally published in Afrikaans in 1994 (winner of the M-Net Prize, CNA Prize, and the Noma Award for African Literature; English translation Leon de Kock).

Citation for TRIOMF – Winner of Best South African Film at the Durban International Film Festival 2008 –  by Junaid Ahmed: ‘… by immersing itself into the often sordid world where poverty, and the educational gaps that attend it, meet an arrogant sense of entitlement, Triomf exposes a series of universal truths. The dirty secrets of capitalism, of racism, of manipulative politics, of the human heart are mirrored in the secrets of one family, whose disastrous disintegration reminds us that a nation’s history is written by individuals.’

Advance screening of TRIOMF next Wednesday March 14, in Fulton 214 at 4pm.

<<This disturbing, impressively performed movie by a leading African director, centres on a dysfunctional family of poor whites unravelling tragicomically in a squalid Johannesburg neighbourhood on the eve of the election of South Africa’s first black president in 1994. It’s adapted from an Afrikaans novel by Marlene van Niekerk, that’s been compared with Faulkner. »  Philip French – The Observer

<<Shocking, dark yet distinctively compassionate Triomf is an implosive character piece that never pokes fun at its subject, choosing rather to humanise the family’s endeavour to make sense of the environment that is reforming before them. »  Little White Lies