Last month I was in Nairobi for the launch of the documentary ‘Heal the Nation’.  This 30 minute film was created by Picha Mtaani (Swahili for ‘street exhibition’) a UN-funded initiative that focuses on reconciliation through ‘photographic exhibitions and debate’ set up by 27-year-old photojournalist Boniface Mwangi.

As violence broke out after Kenya’s 2007 election, Mwangi quit his job as a journalist and risked his life to travel around Kenya documenting what was taking place.  Mwangi’s photos were published in edition 5 of the literary journal Kwani, which attempts to ‘provide a collective narrative on what we were before, and what we became, during the epochal first 100 days of 2008’.  My research on contemporary Kenya writing is currently focusing on Kwani 5 and I am particularly interested in the ways in which the texts published in this journal emerged out of the literary network and google group ‘Concerned Kenyan Writers’, as well as the way in which these texts have continued to circulate in different public spaces.  Mwangi’s photographs were also published in the book Kenya Burning, a co-publication between Kwani and the Go Down Arts Centre (who curated an exhibition of the same name in April 2008).  Picha Mtaani have exhibited photographs from Kenya Burning across Kenya and these images have been seen by over 500,000 people.  The documentary is based on footage of this travelling exhibition; it shows both emotional reactions to the photographs themselves, and shares the narratives of victims and perpetrators prompted by their encounter with the exhibition.  Picha Mtanni are hoping to reach 3 million more people with these images and stories through the circulation of the documentary.

The free launch event took on City Hall Way in the city centre of Nairobi outside Nairobi City Council, overlooking Nairobi Law Courts and the Kenyatta Conference Centre.  From 10am Picha Mtaani’s exhibition of photos documenting the post-election violence was on display, and by positioning this in a public pedestrian area it drew in a constant stream of people.  From 10am to the screening of the documentary at 7pm people crowded around the images and it was often impossible to get close to them. 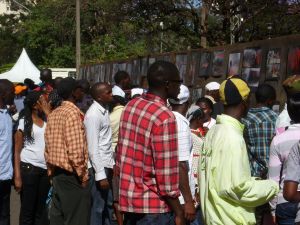 One of the reasons I travelled from Kigali to be at this event was that across the day, building up to the screening of the documentary, was a programme of poetry and theatre which focused on sharing literary responses to the post-election violence.  The poetry performances were curated by Njeri Wangari, also known as Kenyan Poet, and featured Teardrops, Ban 2 Slim, Harry the Poet, Akil (El Poet) Wario Hellen, Ndanu and Njeri Wangari herself.  Wangari commented that poetry is often associated with expressing love and joy but that here it was being used for ‘reconciliation and speaking out’ and another compere commented ‘‘we are not only here to be entertained but to make a lasting impression.’  Over the afternoon as poetry in English and Kiswahili was shared with a small audience and drew in a passing crowd, audience members were encouraged to partipate not only in refrains (for example Wario Hellen’s ‘Kenya is for you and I’) but also in discussion and debate about Kenya’s past, present and future.

Break-time productions then performed a powerful theatre piece in Kiswahili directly in front of the photo exhibit.  This was one of the first times that the attention of passers-by turned almost entirely away from the photographs and towards the performances. 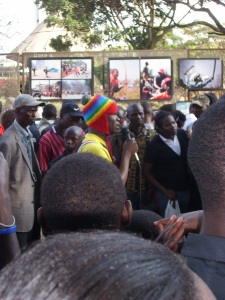 This piece in Kiswahili involved an extremely animated and physical confrontation between three characters, with a panga used as a powerful visual ‘prop’.  Again it was an interactive piece with the surrounding crowd encouraged to chant and raise their hands.  The performance was repeated directly before the documentary screening, with one member of the cast introducing it as about ‘where we’ve come from and where we would not want to go back to.’

As the sun set 1,133 candles were lit by members of the audience and placed in brown paper bags before the photo exhibit, as a striking visual act of memory for those that died in the violence. 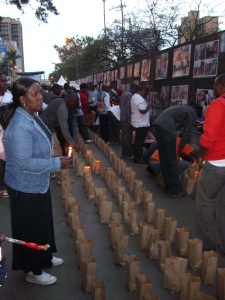 Directly before the screening of the documentary speeches were made by donors who funded the making and production of the Heal the Nation, including USAID, the Swiss Embassy in Kenya and UNDP.  Swiss Ambassador Jacques Pitteloud, who was ambassador in Rwanda during the genocide, gave a speech sharing his experiences and drawing parallels between the events in Rwanda and the post-election violence.  He emphasised the importance of remembering out of respect for the past, but also for the present and future.  He highlighted that in Rwanda that there had been a history of smaller massacres and violence from the 1960s onwards, hinting that there could be worse to come for Kenya if issues of healing and reconciliation aren’t addressed before the elections in 2012.  Yet he conspicuously failed to highlight that for Kenya too the post-election violence was not a one off, something that Picha Mtaani’s chair responded to and emphasised in his speech that followed.

This event was interesting and important for my research in a number of different ways:

The event finished with one of the victims of the post-election violence who shared his story during the documentary, addressing the audience and explaining why for him this project was so important.  His words were a powerful comment on the role of storytelling and memory and so I want to end with them here.  Having lost his brother in the violence and now working to support his brother’s family, he commented that without initiatives like this ‘we die with our stories’.