AiW note: Ukamaka Olisakwe’s Ogadinma Or, Everything Will Be All Right was released with Indigo Press in September and from Masobe Books on the 27th October this year – marking itself as a “feminist classic in the making” (Indigo).

Umezurike: Congratulations, Ukamaka! Ogadinma, or Everything Will Be All Right is a beautiful heartbreaking book that deals with a topic at the heart of much feminist discourse – male violence. Though it questions the ideology of women as men’s property, what it reminds me about is that male culture everywhere makes it difficult for women to breathe. Could you provide a bit of context how this story came about? Why was the story important for you to write?

Ukamaka: I had read a lot of literatures set in time past, and while they covered a variety of topics at the heart of the feminist discourse, I felt something was missing: the stories about the women in my community in southeastern Nigeria, who were married off when they were barely teenagers, who were punished for getting pregnant at home, who ran away from their marriages to faraway places to avoid stigmatisation, who abandoned their children, etc, etc. I had read a lot of stories about women from middle-class families, whose circumstances were different, but the women in my community were from low-income earning families and didn’t have the protection and privilege that comes with wealth. So, I thought of creating a composite of these characters and to include their story in the conversation.

Umezurike: Ogadinma opens with one of the longest opening sentences I have read in Nigerian novels, and it narrates a vivid scene that links the historical, political, social, and religious in one engaging paragraph. Why begin the story that way?

Ukamaka: The story is set in the 80s, at a peculiar time in Nigerian history, and also when my mother and her sisters had newly married their husbands. And having grown up seeing the photographs from that time, of my mother and her sisters dressed in fancy fineries and wide scarves and tomato-red lips, and also the photos my father had saved of the tumultuous period in Kano during the Maitatsine riots, I thought to weave all of those stories in that one paragraph, to set the tone for the book. I think it is my favourite opening yet.

Umezurike: One finds it hard to see positive images of men in your novel. Apart from Nnanna, that is, who strikes me in contrast as an exemplar of what it means to be a man. He epitomizes what I describe as “receptive masculinity” in my dissertation on Nigerian masculinities. Nnanna recognizes Ogadinma’s pain, her inability to breathe amid the chokehold of culture and tradition. What did you hope to achieve with his character? How might your book challenge men to rethink assumptions about masculinity?

Ukamaka: Funny enough, I also liked Ogadinma’s father, despite the harsh decisions he made. He loved his daughter dearly, and was overprotective of her. But he was preconditioned to believe in this toxic idea that a woman belongs to a man, and he held fast onto his warped traditional idea of female sanctity. I like to believe that he is a well-rounded complex character and I totally see him in the men in my community, who love their daughters but who, for various cultural and religious reasons, deny their daughters bodily autonomy. Nnanna, on the other hand, is what I hope that our men will become – men who are not threatened by a woman’s ambitiousness; who believe in economic, political, and social equality of the sexes.

Umezurike: You also criticize women such as Aunty Ngozi and Mama Iyabo who perpetuate dominant norms of womanhood. However, you emphasize female solidarity through your portrayal of Ejiro. Can you say a bit about this?

Ukamaka: Aunty Ngozi and Mama Iyabo are very realistic. We know such women, who defend patriarchy and perpetuate it because it is the only way they know how to be, or because they benefit from it and are rewarded for it. Ejiro, on the other hand, represents the community of women who embrace and support other women. It was necessary to tell our stories in full, no matter how unpleasant some part of us might be.

Umezurike: Why, if I may ask, did you allow a character as vile as Barrister Chima to go unpunished, given that we have a sense of him as a predator who violates women in need? How does this undermine social justice advocacy for women who suffer a fate as similar as Ogadinma’s? 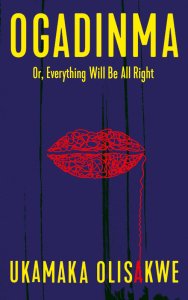 Ukamaka: I don’t think it undermines social justice in any way. Rather, Chima is a reminder that we have predators who walk free, who go unpunished. The book mirrors reality, no matter how unpleasant this reality is; it would be so easy to let my emotions get the best of me and kill him off in the story. But, while that will give me some temporal satisfaction, it wouldn’t change anything. It wouldn’t stop what happened to Ogadinma. It would only distract from the important story – Ogadinma’s journey, her growth. I didn’t want to give that vile character any more spotlight. I hope that his survival in the story will enrage us. Anger is a good thing. That people like him still strut around, flaunting their power, is a reminder to keep on having these conversations, to stand with and support women in our communities, when they come forward with their stories.

Umezurike: One of the scenes I particularly like has to do with the ten-second incident where Tobe loses his virility. I found it quite humorous and how, of course, masculinity is usually about virility and power. Could you say a few words about this?

Ukamaka: You know our people like to make emphasis about manhood and virility and how these, including wealth, determine the dignity a man is accorded in his community. For the woman, it doesn’t matter what she achieves – the diplomas she accumulates, the ceilings she smashes through; she is mostly accorded some dignity if she agrees to marriage, else we sneer our noses at her for choosing to stay single, for walking away from marriage. We mock women who chose to be childfree or who have difficulty with having children. And so, in that scene where Tobe loses his virility, I simply showed what it feels like to walk in the shoes of the woman.

Umezurike: You seem to pay homage to some African literary forebears in your novel – Achebe, Flora Nwapa, Wole Soyinka, Buchi Emecheta, and Ama Ata Aidoo. Why is that?

Ukamaka: Because they paved the way for me. Because the women writers centred women in their stories and that gave me the permission to write the kind of stories I want to write.

Umezurike: The novel ends on a note of optimism for Ogadinma. I find this sentence uplifting: “she could finally breathe.” When I got to that part, I remembered the Black feminist scholar Hortense Spiller’s quote, “Without freedom, there can be no love,” which she made at a talk titled “To the Bones: Some Speculations on Touching.” I like that Ogadinma reclaimed her voice, her agency at the end. What hope do you have for social change?

Ukamaka: I am quite optimistic, unlike I used to be in the past, and this is because of the necessary conversations we are now having – thanks to social media – about the place of the woman in her community, where she belongs, to whom she belongs. My heart fills with joy every time I see tweets from young women who actively and unapologetically push back against patriarchal practices we tolerated a few years ago. So, I think that change is manifesting and it is so beautiful to watch.

Umezurike: Thanks, Ukamaka! It was a pleasure chatting with you.

Ukamaka: My pleasure, too, Uche.

Ukamaka Olisakwe is a Nigerian novelist, short story writer and screenwriter. In 2014 she was chosen as one of 39 of Sub-Saharan Africa’s most promising writers under the age of 40. Olisakwe’s writing has appeared in Catapult, the New York Times and The Rumpus and many more international journals. She wrote the screenplay for ‘The Calabash’, a Nigerian television series that premiered in 2015 on Africa Magic Showcase. Ukamaka won the Vermont College of Fine Arts Emerging Writers Scholarship to pursue an MFA in Writing and Publishing in 2018. She currently lives in Vermont.

Uchechukwu Peter Umezurike is a PhD Candidate and Vanier Scholar in the English and Film Studies department of the University of Alberta, Canada. His critical writing has appeared in Tydskrif vir Letterkunde, Postcolonial Text, Journal of African Cultural Studies, Cultural Studies, Journal of African Literature Association, and African Literature Today. He is a co-editor of Wreaths for Wayfarers, an anthology of poems.

Umezurike has been a long-time generous contributor to AiW. For more of his AiW posts, including his Words on the Times – a Q&A set intended to connect our communities up during the challenges of the pandemic – please click through to his AiW Guest posts here.

Ukamaka Olisakwe’s heart-wrenching novel tells the story of the naïve and trusting Ogadinma as she battles against Nigeria’s deeply-ingrained patriarchal systems in the 1980s, a time of coups, food shortages and religious extremism.After a rape and unwanted pregnancy leave her exiled from her family in Kano, thwarting her plans to go to university, she is sent to her aunt’s in Lagos and pressured into a marriage with an older man.As their whirlwind romance descends into abuse and indignity, Ogadinma is forced to channel all of her independence and resourcefulness into finding her voice and strength in the face of abuse and cultural expectations.

Like Loading...
‹ Creative Times “in the making”: unfolding the Keiskamma COVID-19 Tapestry of Resilience
Here’s My Body, Take it! A Review of Romeo Oriogun’s ‘A Sacrament of Bodies’ ›