Home › Reviews & Spotlights on... › “Through the crooked jogs of history”: A Review of Peter Kimani’s Dance of the Jakaranda

“Through the crooked jogs of history”: A Review of Peter Kimani’s Dance of the Jakaranda

The year is 1963. The newly independent British colony of Kenia is renamed Kenya. Inside what used to be colonial officer Ian Edward McDonald’s “Monument of Love”, the Jakaranda Hotel, a young man, Rajan, is kissed by a mysterious stranger in the dark. Thus opens Peter Kimani’s Dance of the Jakaranda (Telegram 2017). Rajan’s quest to find the elusive kisser leads us down the annals of both his family’s and, ultimately, Kenya’s history. We later learn that Rajan is the grandson of Babu Rajan Salim who sailed from India as migrant worker for the British crown with his wife, Fatima, in 1897. The young man finds himself unwittingly entangled in “a sixty-year grievance between two old men – one brown, Babu; and one white, Master” (22). The retrospective narrative of McDonald and Babu’s feud takes place within the four houses into which the novels sections are divided: the houses of Music, Silence, Light and Darkness. 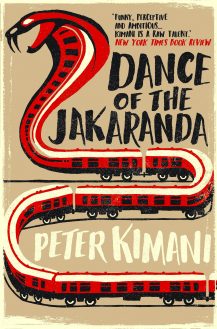 Having fled from South Africa, McDonald, who is initially introduced as “Master”, arrives in Kenya as part of Britain’s plan for colonial expansion in East Africa. In an attempt to impress his estranged wife, Sally, he insists that a mansion lined with jacarandas be built for her. McDonald takes up the job of building a railway track in Mombasa as a means of upward mobility; he “continued dreaming that another future was possible for him and Sally. He saw virgin territory and trembled with lust. He would conquer nature and assert his control” (54). It is not only the natural world that McDonald ultimately wants to rule over, but also the indigenous peoples of the colony, together with migrant Indian workers sent to work on the railway by the British crown. Shortly after McDonald’s arrival, a reluctant Sally joins him on the colony, but boards a ship on the very day of her arrival after having witnessed McDonald’s inhumane treatment of his black workers – an incident which recalls her experiences of him in South Africa. From England she posts him divorce papers with an enclosed letter declaring, “Yours is the Heart of Darkness” (63). While Sally’s letter stems from her own guilt over her whiteness, her words reflect two of Kimani’s intertexts: Conrad’s Heart of Darkness and Achebe’s landmark criticism of Conrad’s colonial novel.

In what may be read as, amongst other things, a response to novels such as Conrad’s, Kimani’s text explores the fundamental fallacy which informs colonial authorities and missionaries – that is, their assumed superiority over the colonised peoples. Motivated by a desire to maintain control and perceived superiority over his workers, McDonald inaugurates an arbitrary racial hierarchy between the white settlers, the Indian migrant labourers and the black Kenyans ̶  a method of division he sows in order to avoid “Blacks and browns joining hands [as] he had seen it happen in South Africa” (134).

In addition to the socio-political nuances occasioned by the retrospective depiction of life under British rule, Kimani’s novel also provides insight into the intimate histories of both Babu and McDonald who, despite being at odds with one another from the moment of their first meeting, ironically share basic human impulses. The novel also contains its fair share of depictions of excesses, ranging from the debauchery and promiscuity of the British settlers to the illicit affairs and betrayals of the various characters.

Kimani’s style is at once dramatic, ironic and full of humour. When the sign previously prohibiting black Kenyans entry into the Jakaranda Hotel is dispensed with at the dawn of independence in 1963, the local inhabitants do away with throwing stones at the white patrons. They exchange these stones for eggs: “The use of eggs, the locals […] conceded, would confirm to the whites that they bore no hard feelings. So, an outing for drinks nearly always concluded with quite a few rotten eggs cracking on white faces” (24).

Dance of the Jakaranda is ultimately a novel of secrets: secrets that coincide with the legacy of the building and afterlife of McDonald’s house which, following Sally having “dropped him like a piece of hot ugali” (18), is transformed into a dairy and, eventually, into the Jakaranda Hotel. Kimani weaves an intriguing tale spanning across several generations with exquisite poise covering not only the feud between the older men, but also the construction of the railway track from Mombasa and Kenya’s liberation from colonial rule. It is at the dawn of the latter era that Rajan is kissed while working as a waiter in the hotel and his quest to find the mysterious girl leads both him and us on a journey through time. Like Yvonne Adhiambo Owuor’s Dust (2014), Kimani’s debut is a remarkable portrait of Kenya and its people, delivered with keen insights into history and the basic impulses which direct human action. It is certainly amongst the greatest novels of the contemporary era.

Thando Njovane is a researcher and writer interested in psychoanalysis, fiction, and higher education. She is also the founder and co-chair of Finding Africa, a cross-continental independent interdisciplinary postcolonial African Studies platform located at Rhodes University and the University of Leeds.

Africa in Words are delighted to be able to offer readers a 50% discount off the RRP of this novel at the Al Saqi bookshop until the end of July. Follow this link and use the code JAKARANDA50.

A New York Times Notable Book of the Year 2018, Peter Kimani’s Dance of the Jakaranda was published by Telegram in the UK in March 2017

Like Loading...
‹ Call for Support in Burkina Faso: A CITY WITHOUT A CINEMA
Event: Edinburgh International Book Festival (11-27th August) ›