Africa Writes, the UK’s biggest annual African literature and book festival brought to you by the Royal African Society, comes to Bristol for the first time, from Friday 6th October to Saturday 7th October 2017, presenting a vibrant programme of events at The Cube Cinema and Hamilton House. Curated with Bristol-based partners, this literary weekend brings together writers from Nigeria, Cote D’Ivoire, Somalia, Uganda, Ghana and across the diaspora for workshops, film screenings, panel discussions, performances and book launches. For African literature enthusiasts and newcomers alike, the festival presents an engaging programme looking at literary activism, adaptation, the cities we live in, forbidden love, hidden histories, and more.

The festival headliner will be Chinelo Okparanta – a writer born in Port Harcourt, Nigeria, and now living in the USA. She will speak about her powerful novel Under the Udala Trees (2015) – a story inspired by Nigeria’s folktales and set in the midst of the Biafran War that uses the lifetime of one woman to explore love and truth of personal relationships, in the context of conflict and division.

Chinelo Okparanta says: “I’m excited to be a part of this very important literary conversation. With Africa in the house, Bristol will surely never be so hip, literature never as sexy”.

Engaging the community across all ages, the festival presents a series of exciting events in

partnership with Somali diaspora arts organisation Numbi Arts, including a collaboration with Paper Nations to run zine-making workshops in Bristol schools, a creative writing workshop and the festival closing party on Saturday 7th October hosted by celebrated poet Elmi Ali, with Bristol community radio station Ujima and featuring DJs and spoken word performances. Kinsi Abdulleh, director of Numbi Arts, says “We are bringing our Numbifest Cross-currents series to Africa Writes Bristol to explore cities and what they mean to us. There is a huge amount of creative activity going on in the Bristol Somali community and we are excited to engage with and showcase this. ”

Jowhor Ile will launch his debut novel And After Many Days, winner of the 2016 Etisalat Prize for Literature. As part of Spike Island’s Novel Writers programme, Jowhor Ile will present his book in conversation with Ivorian writer and literary activist Edwige Dro.

Exploring the relationship between literature and film, Africa Writes Bristol launches on Friday 6th October with an evening of screenings and discussion at The Cube Cinema, in partnership with Bristol-based film festival Afrika Eye, including Biyi Bandele’s film The Half of a Yellow Sun, and a panel discussion looking at the intersection of film and literature about and in Africa.

The University of Bristol in partnership with Kampala-based Centre for African Cultural Excellence (CACE) will run a workshop on Literary Activism and Arts Management for young Bristol-based creatives, and host a panel discussion about a new generation of literary entrepreneurs based on the African continent, featuring Bibi Bakare-Yusuf (Cassava Republic Press), Edwidge Dro (Abidjan Lit, based in Cote D’Ivoire) and speakers from Writivism festival in Uganda. Both sessions draw directly from a collaborative research project on literary activism and Africa involving CACE, the University of Bristol and the University of Exeter. 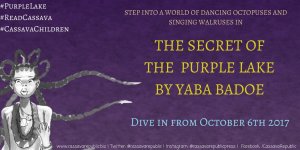 Children 8-12 years old are invited to attend a creative writing and storytelling workshop with Ghanaian British filmmaker and writer Yaba Badoe, who will read from her new book of interwoven tales, The Secret of the Purple Lake.

Africa Writes 2017 Pop-Up: Bristol is brought to you by the Royal African Society in partnership with Numbi Arts, The University of Bristol’s Centre for Black Humanities, Afrika Eye, Ujima Radio, Spike Island, Centre of African Cultural Excellence, Coexist at Hamilton House, The Cube Cinema, Book Kernel and Paper Nations, and is supported by Arts Council England and Sigrid Rausing Trust.

You can download the full festival programme here and 90% of this is free: http://bit.ly/AW2017Bristol

You can get tickets for ‘Africa Through the Lens of Fiction and Film’ hosted by Afrika Eye here: http://bit.ly/AW2017Lens

And you can get tickets for the festival closing party hosted by Numbi & Ujima here: http://bit.ly/AW2017Cities

In prep for the @good_book_appreciation_society Book Cover Design Awards which which were held yesterday, Katie Reid spoke to two of the talented finalists, Casper Schutte (@spookdesignco) and Marius Roux about designing book covers, their nominations, the “acacia tree meme”, & we got some great book recommendations in the process! 📚
The wonderful work of @plugintheatre has made us look back at #LockdownShakespeare @shakespearesouthafrica and our Words on the Times with them last year.
Kagiso Nko, PhD researcher at the University of the Western Cape, reviews 'Anxious Joburg', with the title "Our discomfort, my discomfort".
Review Q&A up on the blog today.
👋Our Calls for & Opportunities... roundup for the month is up! Swipe for more - 🔗link (to our homepage) in bio🔗...
New AiW Q&A up at the site - Things that Matter… 🔗 in bio 🔗