Worthy of Note: the “Red Africa” series and the exhibition “Things Fall Apart” 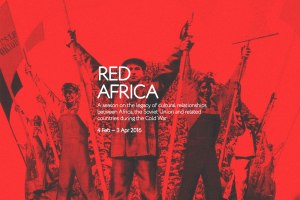 The culmination of a two-year research project on “Socialist Friendship,” run by the Calvert 22 Foundation, was a series of events between February and April 2016 organized at the Calvert22 Gallery in London under the title “Red Africa Series”. The series included the exhibition “Things Fall Apart,” curated by Mark Nash, as well as panel discussions, film screenings and artist talks. The research project and the series explored “structures of feelings,” in terms of both a historical narrative of international socialist relations and an imprint left in visual arts. Among the relations between socialist-leaning states across the globe, particular attention was given to the continent of Africa.

The series sensitively illuminated a unique tension that marks the Cold War era and which can be intuited already in the juxtaposition of the terms “structures” and “feelings.” On the one hand, the Marxist ideology of “friendship of the peoples” over and above nations took shape, in practice, through various forms of cooperation, ranging from the institutional and formalized (e.g. scholarly exchanges and scholarship programs, formalized bilateral economic and political state alliances), to the more fluid and dynamic (e.g. of aesthetic expressions and conventions). On the other hand, this period is also marked by profound “loss.” The continent of Africa being particularly affected by losses associated with colonialism (e.g. cultural heritage, the right to autonomous self-definition) as well as, with the end of the Cold War, the loss of an ideological and political alternative that Marxism and Socialism symbolized. 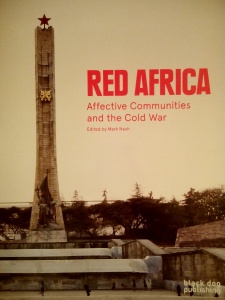 The “Things Fall Apart” exhibition was a multimedia reflection on this legacy of friendship and loss through an impressively displayed collection of visual arts, including photography, film (both historic and contemporary interventions), and propaganda materials and public art. The trope of loss was emphasized through a repetition of the title of Chinua Achebe’s canonical postcolonial novel (1958) and through allusion to W.B. Yeat’s poem “The Second Coming” (1919). A publication prepared alongside the series, entitled Red Africa: Affective Communities and the Cold War (Black Dog Publishing, 2016), includes beautiful reproductions of art works featured in the exhibition and rich essays that significantly elaborate on key themes, contributed by researchers and artists who took part in the research project. The publication title emphasizes the trope of friendship by alluding to the book by postcolonial scholar, Leela Gandhi: Affective Communities: Anticolonial Thought, Fin-de-siècle Radicalism, and the Politics of Friendship (2006). The titles of the exhibit and the publication thus intelligently embrace the dialectic of loss and connection/creation through friendship, which the series as a whole endeavored to explore. As Nash writes in the publication, the series privileged artistic expression as the most powerful way of engaging with “forms of identification with what now appear to be ‘lost’ alternatives’, where newly independent African countries adapted socialist ideas to liberate their culture and economics as well as politics, but where those projects were lost through the ravages of neo-liberal and capitalist ‘structural adjustment’” (p. 9).

After London, “Red Africa – Things Fall Apart” traveled to other locations in Europe, including a German-based centre for African contemporary arts and cultures Iwalewahaus, associated with the University of Bayreuth, and the Dashkova Centre at the Department of European Languages and Cultures at the University of Edinburgh. It is currently in the Galleria Avenida da India in Lisbon,i Portugal through March 2017. Perhaps, in the “internationalist” spirit that the series both depicts and embodies, the near future holds also a stop on the African continent, so that, with no tinge of nostalgia, things might fall into place. 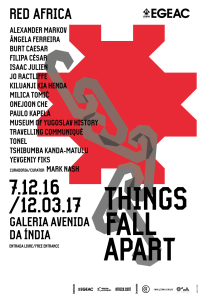 More about the exhibit here.

The catalogue can be purchased through the bookshop at the Gallery Calvert 22.

A number of articles on topics emanating from the exhibit are also featured in the Calvert22 Journal.

This piece is part of a series curated by Katarzyna Kubin for Africa in Words.

We have begun a new series on showcasing South African artist and poet Dolla Sapeta's (@sapetart) latest initiative, the New Brighton Art School, and feature the work of some of its brightest emerging artists. Check out our interview talk with Dolla about the Art School program itself via the link in our bio! More to come...
In case you missed it, check out our wrap up of February's news from the African literary and cultural world via the link in our bio! ⚡
Happy new month! This week we are reading Hadithi & The State of Black Speculative Fiction by Eugen Bacon and Milton Davis, published by @lunapresspublishing 🌌
This week we are celebrating the South African release of 'They Called You Dambudzo: A Memoir' by Flora Veit-Wild (@jacanamedia). We kicked it off with a review of the book by @lizzyattree which you can read via the link in our bio!
On the blog now, Kwame Osei-Poku writes a review of the collection Limbe to Lagos: Nonfiction From Cameroon and Nigeria (@the.mantle, @bakwabooks), compiled by Dami Ajayi, Dzekashu MacViban (@dzekashu_macviban), and Emmanuel Iduma (@emmaiduma). To read, the link is in our bio!
A new review is up on the blog by Thulani Angoma-Mzini! "Got my hair, got my head: A review of 'Living While Feminist: Our Bodies, Our Truths'" - edited by Jen Thorpe, published by Kwela Books (2020) @nbpublishers. Link is in our bio 🌟