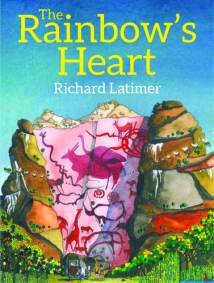 The Rainbow’s Heart is a picture book written and illustrated by Richard Latimer, based on the author’s experiences of travelling in Botswana in the late 1970s. Originally published in 1982, it has been recently reissued by Bumble Books.

The book tells the story of two cousins, Dusty Rhodes and Bob Wyre. One day they are resting in their garden when a honeyguide appears and drops a red feather, asking the cousins to follow him. The cousins take a journey through the African countryside, passing borders, battling elements and marvelling at the natural beauty on display. When they finally arrive at their destination, the rainbow’s heart, they discover a colony of bees who are starving as all of the flowers in their habitat have been stolen by villain Sylvester Clutch. The cousins plant new flowers, saving the bees, and return to their homes in the city. By working together with nature, rather than against it, both the natural world and humans are shown to flourish. 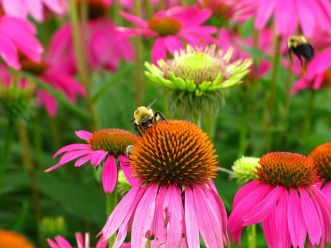 Latimer is an artist, and described The Rainbow’s Heart as ‘a picture-driven children’s book’. This focus on the visual is immediately clear, as the illustrations in this books are both vivid and detailed. A strong use of geometry is clear throughout, giving the pictures an almost graphic style in places. The depictions of wildlife are full of movement, epitomised in an intricate drawing of a hare hiding in long grass, which has such a sense of crouched readiness that the reader expects her to run off the page at any moment.

The image of Africa presented by the illustrations is a place of incredible beauty, overflowing with life and wonders. During a memorable double page spread, we see the natural beauty of Africa juxtaposed with the mundanity of human creation as we get a character’s eye view of Dusty and Bob’s journey. The bottom half of the image shows the details of the truck the cousins are driving in, all painted in muted greys. Above it we see their view through the windscreen, full of wildlife, colour and movement. A glimpse of the characters’ faces in the rear-view mirror shows their joy in the beauty that surrounds them, and the reader is encouraged to share in that joy and wonder. The illustrations in this book provide a paean to the natural beauty of Africa.

It is unfortunate, therefore, that the text simply does not work alongside the illustrations. At times the story is barely coherent, jumping from scene to scene and frequently either missing key information, or contradicting itself. For example, the villainous character of Sylvester Clutch (who also conforms to the problematic trope of being described as physically ugly) is initially described as being just outside the city where the cousins are, and then ‘faraway’ from Africa. Yet the cousins are shown driving to their destination in what appears to be not a huge passage of time, so they cannot be ‘faraway’ from Africa. The initial meeting with the honeyguide also suggests that the cousins must somehow be privy to information about Sylvester Clutch, as they can understand the honeyguide’s message of dropping a red feather, when there is no previous suggestion that they have any knowledge of Sylvester Clutch at all. 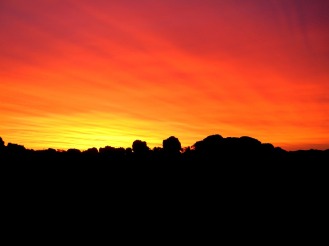 More concerning is that the text lumps Africa together as a single entity. The cousins are shown as crossing a border, yet there is no clarification of which country they have come from or gone to, as only ‘Africa’ is referenced. When the cousins arrive at the rainbow’s heart, they are suddenly no longer in a real place, but a magical location (complete with magic water which allows their flowers to grow instantly and become as tall as trees). This presentation of this area of outstanding natural beauty as suddenly unreal rather undermines the message that Africa is a place of real natural beauty – it becomes magic that underpins this ecosystem, rather than the real land and climate.

Due to the detailed nature of the illustrations, there is also no room for the text and illustrations to work together in any way. The illustrations are placed at the top of the pages, with the text simply, and very separately, displayed below. This layout only serves to emphasise the disconnect between the illustrations and the text, and reinforces the suggestion that the text was an afterthought, rather than a building block of the book. This leaves an overall impression that this book may have worked better as an exhibition of art, rather than the jumbled narrative that it has become.

Japanese language rights for The Rainbow’s Heart have been sold. 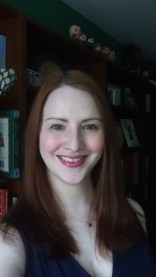 Jen Aggleton is a qualified teacher and librarian. She is currently undertaking a PhD in Education at the University of Cambridge, exploring children’s responses to illustrations in novels.

Richard Latimer has an affinity for the visual arts, be it line, colour or solid. He has exhibited sculpture and paintings at the Grahamstown Festival as well as at the Ann Bryant Art Gallery in 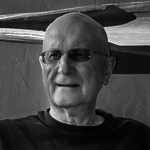 East London where one of his sculptures is in the permanent collection. His professional career as an architect heightened his interest in drawing, illustration and design and helped him to think in pictures. Currently, Richard devotes much of his time to writing and illustrating his own books. (Source: Bumble Books)

Like Loading...
‹ Event: Words that travel: Rhythms of Literature, 21 January 2017, London
“In from the Cold War”: a colloquium on Eastern Europe, Africa and cultural diplomacy during the cold war ›