‘(Re)Viewing the Visual: Art, Photography, Film’ – Reflections on the 5th African Popular Cultures Workshop at the University of Sussex, 19 April 2016

Now in its fifth year, the University of Sussex’s African Popular Cultures Workshop creates a lively space where practitioners, researchers and enthusiasts alike come together to consider and celebrate aspects of cultural production in Africa and the diasporas, and to engage with questions about the relationship between people, both as individuals and communities, and art in all its myriad forms. This year’s organising committee – made up of John Masterson, Lecturer in World Literatures, and two PhD students: Rehab Abdelghany and myself – chose visuality as the overarching theme for the 2016 workshop, and we were fortunate to be able to create a programme which framed and probed this subject from an array of theoretical, institutional and geographical perspectives.

The workshop opened with Pamela Kea, Senior Lecturer in Anthropology at Sussex, giving a fascinating presentation on her research into the social practices of photographic production and exchange between Gambian migrants in the UK and their children and carers in the Gambia. Pamela argued that this transnational practice, in which foster families in the Gambia send formal portrait photographs of children to their parents in the UK, creates a ‘visual economy’ that has multiple functions and speculative effects: it generates intimacy between parents and their children by visually indexing the child’s embodied presence, and also sanctions the decision to send children back to the Gambia in order that they be immersed in its languages and culture. 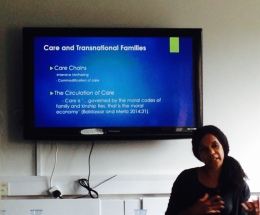 Pamela further demonstrated that the moral and social value accrued through this visual exchange has deeper significance for the maintenance of bonds between the Gambia and its diasporas. Remittances sent to the Gambia make a significant contribution to its economy, so while the photographs themselves do not have any exchange value, their production and circulation bolsters social mobility and enriches transcontinental kinship ties. Pamela’s vibrant paper refracted this photographic practice through multiple lenses – aesthetic, moral, transnational, and economic – and offered both an intersectional and ethical theorisation of the cultural significance of visuality in the Gambia and beyond.

Pamela was followed by Marion Wallace, Curator of African Collections at the British Library, who shared key insights about the design and execution of the library’s major exhibition, ‘West Africa: Word, Symbol, Song’ (held between October 2015 and February 2016). In contrast to Pamela’s micro-social account of the significance and function of African visual cultures, Marion’s curatorial perspective introduced us to the institutional processes and politics that frame the portrayal and reception of African cultures in the UK today. Marion emphasised that she and the other organisers wanted to tell an accessible but complex story of West African cultural history through the exhibition, and revealed that the visual quality and impact of artefacts was an important consideration when the individual displays and broader narrative of the exhibition were being designed. 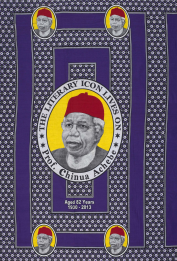 Image from the British Library

Marion also revealed that she had wanted to use the exhibition to start a conversation about the ways Africans have been presented in the UK and the West. Given the long history of negative stereotypes about Africa in Western literatures and popular culture, the exhibition presented both the visual vivacity and historical reality of West African cultures, paying attention to the way they have been circulated and interpreted around the globe. Indeed, while the number of visitors to the exhibition was below the library’s average, Marion felt that it gained positive exposure in the wider community and created a space for productive discussion about the visibility of African arts in London’s diverse cultural landscape.

Bwesigye Bwa Mwesigire offered yet another practical and institutional perspective on the relationship between visuality and popular cultures in Africa. Bwesigye is the co-founder of Writivism, a cultural initiative which promotes emerging writers based on the continent by holding workshops, running literary prizes for unpublished work, publishing anthologies, conducting outreach to schools, and curating an annual literary festival. 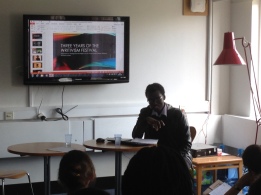 While Writivism is primarily a literary initiative, Bwesigye argued that by operating outside the bubble of the publishing industry, the festival is able to forge and explore new connections between different art forms: to demonstrate the way oral, textual and visual cultures in Africa overlap and speak to each other across linguistic borders. Bwesigye’s passion for Writivism shined through, particularly when he described running workshops in schools with writers; these encourage students to take ownership of narratives that resonate with their lived experiences.

Polly Savage, Senior Teaching Fellow at SOAS, also considered the social impact of cultural production in her incisive presentation on ‘Art education and the Cold War in Mozambique’. Structuring her talk around five images of Mozambican art, Polly considered the way visual arts are used in defining communities and national identities. The artists examined all developed their practice in the context of Cold War politics, when thousands of Mozambican students received scholarships to study in Cuba and the Soviet Union. Polly explained that a number of these students studied in art schools, and that when they returned to newly independent Mozambique they were expected to work for the state and help build a new visual culture for the nation. 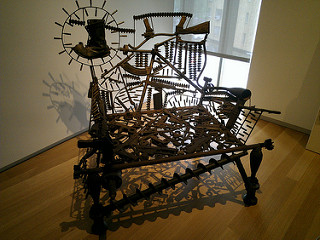 By offering incisive analyses of works by artists such as Celestino Matavele and Gonçalo Mabunda, Polly expertly traced the development of Mozambican popular art in relation to the impact of an international socialism, and drew out its tangled relationship with issues around social reproduction, nationalism, and agency. Polly also argued that as the socialist ideology lost its sway in Mozambique from the 1980s onwards, it was replaced by a liberal and developmental agenda that increased the influence of international art markets. Thus, her presentation foregrounded the way visual cultures became deeply involved in questions of politics and national identity in the late colonial and postcolonial period.

The workshop was rounded off with a multimedia presentation from the filmmaker and writer Sade Adeniran. Sade gave a reading from her short story “Martha Mauden & Co.”, then we screened the film which she adapted from the story, titled ‘More Cake’. These performances were followed by a Q&A chaired by Rehab Abdelghany.

Rehab began by asking Sade about the process of adapting the short story into film. The writer revealed that the new story developed itself within the earlier narrative; her stories always begin in prose form before she translates them into the most appropriate genre or medium. Sade’s multimedia practice led her to start an online blog that facilitates different kinds of textual and oral storytelling, and which she hopes will help generate an immersive creative practice. But she also explained that embarking on new projects never gets easier: that it always feels as if you are starting again with every new story. 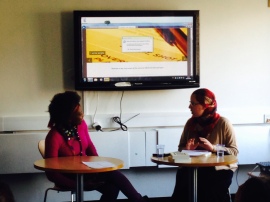 Sade’s emphasis on and faith in the organic and transformative power of storytelling, which can be mediated by visual, textual, and oral forms, and through their combination, worked to reinforce the sense I had gained across the day that visual codes are always deeply embedded in the socio-cultural landscapes of communities, whether local, national, or transcontinental. Indeed, it is not the technical attributes of visual media that define their significance, but the generative, emotional, and speculative interface which visuality conjures within and between different cultural spaces. 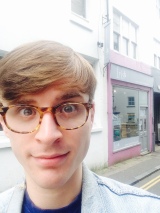 Matthew Lecznar is a PhD student at the University of Sussex. His doctoral research explores the creative and dissident legacies of the Nigerian Civil War in different forms of material and audio-visual culture. His wider research interests are in anglophone African literature, postcolonial conflict literature, gender and sexual dissidence, world literary book history, and humanitarian fictions.