I am leaning toward a prediction that Namwali Serpell will be the winner of this year’s Caine Prize for a number of reasons. For starters, a win for Serpell would go some way to deflecting one of the major criticisms the Caine Prize has faced in recent years: that its winners are from a disappointingly small pool of African nations, even considering its Anglophone criteria. Serpell is the only shortlisted writer not from Nigeria or South Africa – two countries that have been well represented on Caine shortlists since its start – and would be the renowned prize’s first Zambian winner. She is also a writer very much ‘on the rise’; since appearing on the 2010 Caine Prize shortlist for her first published story ‘Muzungu’, Namwali has become an associate professor in the English Department at Berkeley, authored a book of literary criticism and been selected as one of Bloomsbury’s ‘Africa 39’, firmly assuring her status within the so-called new generation of African writers.

There is another reason that Namwali Serpell may be this year’s winner, which is that ‘The Sack’ is a
wonderful entry, absorbing and strange and unnerving as well as eloquently composed. 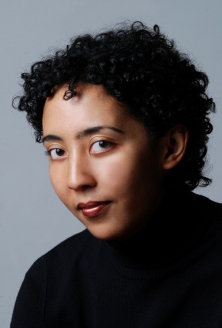 It is an exposure of three men – J, ‘the man’ and ‘the boy’, none of them afforded a real name – caught somewhere between a dark dream and a dark reality. The story begins and ends with the image of a sack: “Grey. Like old kwacha. Marks on the outside. No. Shadows.” Relying on only a sack as its narrative marker, Serpell’s text exists apart from time and space in a manner that demands a new approach to reading and understanding.

Although her snapshot of the characters and the delicate, disturbing power balance between them is a story in itself, ‘The Sack’is also a snapshot of fiction and form, and the boundless possibilities that lie within them. Serpell’s short story is loosely divided into two intersecting narratives that follow the experiences and thoughts of its two main characters, who at first seem to mirror the trope of master and servant. J owes ‘the man’, his bwana, an unexplained longstanding debt, which he repays by cooking and cleaning and “hating him in that tender way he had cultivated over the years”. The man, who does not believe he is treated like a “real bwana” should be, lies frail, jaded and nostalgic for a fading love in his darkened bedroom. So far, so normal.

Yet Serpell finds ways to challenge and subvert our assumptions throughout, and in doing so she calls into question the privilege of readers’ insight. Though J could easily be read as a young, even childlike figure, this perception is thrown off when his master refers to him as an old man; the bwana seems like he might be white when he remarks that he “know[s] what the colour of [his] skin means to someone of our generation”, but later he pities J for having to “sweep and cook for me like I’m a musungu”. And though J and the boy who brings him fish seem to exist in more of a reality than the dream- haunted man, it is the man who narrates his subconscious in the present tense whilst J is stuck recounting what has happened from some unknown point in the future. Indeed, the entire story is pulled forward and backward to disorienting effect, as alluded to when the man ponders the meaning of his recurring dream about being trapped inside the eponymous sack:

“In the first dream, the sack is full and it is being dragged. In the second dream, I am inside it. What will the third dream reveal? You laugh. You say that dreams move forwards, not back.”

This repeated reminder that “no man dreams backwards” is a confusing prophecy, particularly given the bizarre nature of the man’s dreams, but The Sack’s ending makes good of its opening promise that “there is a sack” and someone is inside it. It is a testimony to Serpell’s thoughtful, considered writing style that the story could feasibly be read back to front. When J and the man are reaching the end we’ve known is coming from the start, one of them reflects: “Which came first? The knife handle abrading his palm? Or the wide agony in his chest?”. Questioning the order of events is mystery enough, but Serpell’s use of ambiguous pronouns also blurs our sense of who is doing what; who is doing the killing and who is being killed, who is in the sack and who is carrying the sack. What matters is that the story ends how it began: with a bwana and a boy and a “handful of notions – love, hunger, fear -” that refuse be buried in any sack, and that instead pulsate throughout every lingering word of Serpell’s story.

For the last two years Africa in Words has been blogging the Caine Prize for African writing.  As Kate Haines wrote in Africa in Words’ first piece about the Caine Prize, we acknowledge that “it is a ‘good thing, but it isn’t the thing’, and yet conversation about whether it is or is claiming to be ‘the thing’ is important and will still continue. The prize has undoubtedly played a significant part in shaping the production and reception of post-millennial African writing in the UK and beyond, and this needs to be recognised and explored critically.”As such, Africa in Words will be sharing a review or comment piece each week on one of the five Caine Prize shortlisted short stories, by different contributors, some regular, some new. The shortlisted stories are:

The stories are all available to download and read for free via the above links and on the Caine Prize website. Read them, our reviews and others, and let us know what you think.