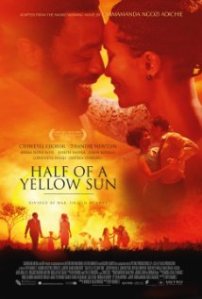 For Chimamanda Ngozi Adichie readers in the UK, the film adaptation of Half of a Yellow Sun has been a long time coming. Widely anticipated by online forums including Adichie’s Facebook page, Half of a Yellow Sun’s world premier took place to much acclaim at the Toronto International Film Festival in September 2013. Since then, I, and I know many others, have been waiting on tenterhooks.

I was therefore extremely excited to be able to book a seat at a recent preview screening at the Arts Picturehouse in Cambridge (an event run by Watersprite – the Cambridge International Student Film Festival) and followed by a Q&A with director, Biyi Bandele. As I’m sure many of you are familiar with the storyline of Half of a Yellow Sun, I won’t gloss it here so much as pick up on the aspects of the text that Bandele drew on to make the film.  Likening film to the short story form rather than the novel, Bandele stressed the necessity of ‘distill[ing] the book to its essence’, an effect which is evident in the intensity and strength of characters in the film.

Half of a Yellow Sun tells the fictionalised story of a group of people – an extended family – and their relations during the Biafran War (1967-1970) in Nigeria. Named after the flag of the Republic of Biafra, which features half of a yellow sun, the film captures the hope and anticipation of the creation of a new state, whilst also emphasising the destruction of war.  The film is composed of startling cinematographic contrasts: lavish Independence Day parties in Lagos and flag-waving celebrations in Nsukka are followed by horrifying scenes of fighting and forced migration. The maps printed sporadically across the screen were particularly effective in tracing the geography of Nigeria and the movements of the characters as they fled from conflict.

Focusing in on small, enclosed spaces, Bandele and renowned cinematographer, John de Borman, also enunciate the intimacy of the private lives of the characters as they live alongside the atrocities of war. The sensual relationship between Odenigbo (Chiwetel Ejiofor) and Olanna (Thandie Newton) is a defining feature of the film. Bandele, moreover, does a great job of aligning the public and private as an inherent feature of Adichie’s narrative strategy. A poignant example of this is the scene of Odenigbo and Olanna’s wedding, where the couple’s union as they dance together to nationalist music becomes symbolic of the creation of the Biafran state. The wedding ceremony is closely followed by the shocking explosion of a bomb.

Scenes such as this, juxtaposed against black and white footage of British newsreel covering the approach of civil war, explore the connection between fact and fiction, public and private. Some interesting thoughts on positionality arise from this technique. Filmed in Calabar, in the south-eastern coastal region of Nigeria, UK viewers are seeing for the first time a distinctly Nigerian, if international, portrayal of this story in place of the journalism that became representative of this period in Britain during the 1960s and ‘70s.

Another important feature of the film is its casting and characterisation. Bandele’s comments on this process were insightful. He spoke of his long friendship with Chiwetel, whose role as Odenigbo had been ‘decided from day one’ (and whose commitment to 12 Years a Slave (2013) caused the filming of Half of a Yellow Sun to take place in just thirty-three days!).  Bandele interestingly pointed out the need to ‘tone down’ Odenigbo’s character, whose role as Olanna’s ‘revolutionary lover’ in the text was ‘larger than life’ and would have appeared as a ‘caricature on screen’. He also spoke of his search for Nigerian actors for the film, referencing in particular his casting of Onyeka Onwenu as Odenigbo’s Mama.

Of particular concern to Bandele was his positioning of the female characters in the film. Recounting a long conversation with Adichie as they travelled across Nigeria prior to filmmaking, Bandele recalls telling her of his plans to create the film from the point of view of Olanna (Newton) and Kainene (Anika Noni Rose) instead of Ugwu. The ‘amazing female characters were there’, Bandele states. They were the ‘most dynamic characters’ for whom he didn’t need to change a single word in the script. The film, noticeably, centres on some of the defining dialogue in the novel. There was something quite emotive about hearing the words, ‘You must never behave as if your life belongs to a man. Do you hear me? […] Your life belongs to you and you alone’, as I sat at the screening on Saturday 8th March 2014, International Women’s Day.

Overall, it has been a lengthy journey in terms of film production. From the event at the British Library in 2005 where Bandele first met Chimamanda Ngozi Adichie, to his falling in love with her novel after its publication in 2006, and finally to the film’s release in 2013, Half of a Yellow Sun has been long awaited. Bandele’s motivation to tell this story of Biafra, however, has prevailed. Half of a Yellow Sun is a story that needs to be told and re-told, and to which the film does immeasurable justice.

Half of A Yellow Sun is due to be released in UK cinemas in April.

Like Loading...
‹ Musing On The Etisalat Prize For ‘Fiction’ – Sorry ‘Literature’
Event: Sussex Africa Centre. Peter van der Windt, ‘Local institutions and Cooperation in the Presence of Migration: Evidence from the Democratic Republic of Congo’ ›

We caught up with Open Hearts Big Dreams (@openheartsbigdreamsfund) for their Words on the Times. We talked to OHBD's founder Ellenore Angelidis about their main project, Ready Set Go Books, children's books, their Read 2 Me program, & more! Link in our bio 📚
We have a new Q&A with author of Africa’s first purely ‘digital novel’, the Kenyan writer and critic, Alexander Nderitu (@alexander_nderitu). He talks with AiW's Davina Kawuma about work, genre & the transfer to print of #WhenTheWhirlwindPasses: "a story can be poured into different vessels and it will become those vessels". Link in bio 📚
Read all about it! Catch up on the month’s African literary & cultural news in our April wrap 🗞️ Link in bio 📰
Up now, we have Q&A with Romeo Oriogun from @uniofexeter students Fisayo Amodu, Dora Houghton & Bryony Gooch. They explore Sacrament of Bodies, distillation, validation, publishing, protest, + more! Link in bio 🌟
Now on the blog, Kadiatou Keita (@Kadikei) asks "Can We Really Decolonize the American University?" in her review of Prof Ngũgĩ wa Thiong'o's lecture at @yale last month. It's a special one, check it out via the link in our bio!
Our #QuoteOfTheDay comes from Abubakar Adam Ibrahim speaking to @exeteruni students this week about writing, history, and Nigeria. Link to the interview is in our bio ✒️