2012’s ASAUK conference at the University of Leeds was my first ever ASAUK conference, and I went anticipating some interesting panels on African literature, hoping to meet fellow scholars of Yoruba, and, to be honest, expecting a massive networking-fest. I scored on all three points! But a couple of talks and panels stood out for me, which I thought I’d briefly reflect on in this blog.

First of all, Ngũgĩ wa Thiong’o’s keynote address on English as a language of Africanist scholarship went over well-trodden ground for those of us who are familiar with the debate about English in Africa and African Studies (which I would imagine was most of the ASAUK audience). But there was one provocative point in his address, which was his challenge to the audience of Africanists as to whether any of us had ever published an article or book in an African language. Despite a sizeable number of African-language speakers, students and scholars in the audience, almost no-one had published in an African language. Presumably, this is the result of understandable pragmatism – especially, most recently, REF-shaped pragmatism, but also, clearly, the need for academic interchange across the continent and beyond. However, I had (naively) assumed that some of the more senior academics in the audience – those who had been working in the supposedly more radical and less bureaucratic academy of the 1970s and 1980s – would have done so.

Ngũgĩ’s challenge made me absolutely determined to publish at least one article in Yoruba (the language I research) if and when I ever get to that level of language competence – not for reasons of faux-authenticity, but because, as Ngũgĩ argued, it’s important that all languages are recognised as carriers of academic debate, and of course there are some ideas it’s easier to express in Yoruba than English. But I’m also interested to hear about the experience academic publishing for people working in other African languages. What is the academic publishing environment like in, say, Hausa, Xhosa or Swahili? There is a reasonable amount of Yoruba-language literary criticism, of which I try to read as much as I can, and I know of one Yoruba-language journal, Laangbasa (based at the University of Lagos), but these aren’t easy to access outside Nigeria (and SOAS’s collections). I’d be really interested to know what others’ experiences are, and also to think about ways we can encourage academic interchange between African languages, even amongst those of us outside the continent?

Turning to the panels on post-millennial African literature, Kate Haines brought in a useful theoretical framework during her discussion with Ugandan writer Goretti Kyomuhendo: Bourdieu’s contention that literature is the product not of a sole author, but of networks of exchange between writers, publishers, readers, critics and so on. As well as setting the tone for the way these panels read literature – through its contexts, materiality and its production and marketing – this framing is also indicative of the way literary criticism of African literature is generally approached in contemporary academia. Throughout both panels, there was more discussion about contexts and production of African texts than about those parts of the papers which offered detailed literary criticism and close reading – perhaps this is both a strength and a weakness of contemporary Africanist literary scholarship in the UK? 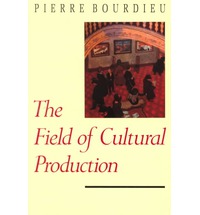 ‘The Field of Cultural Production’ by Pierre Bourdieu

From my own perspective, a lot of ideas came into focus during both of the post-millennial panels: the importance of genre (fiction and non-fiction in particular); the role of cosmopolitanism in African literature and texts; the need to fully interrogate what internet-based writing and self-publishing mean (in particular we discussed whether self-published can be understood as a failure of conventional publishing or as a norm, and compared contexts for internet- and self-publishing in Uganda, South Africa and Nigeria); what is distinctive about the post-millennial and the ‘newness’ of the past decade; and the relationship between ‘local’ and ‘global’ literary cultures.

As a reflection on ASAUK 2012, despite this being an avowedly inter-disciplinary conference, what I actually valued about it was the chance to focus intensely on literature. I’m based in an inter-disciplinary department and so the kind of detailed discussion and excitement about African literature this panel generated was particularly novel and energising for me. The audience was generous and helpful with its comments (particularly from senior academics in the audience to the post-graduate speakers), and there was a genuine discussion going on in the Q&A, rather than the typical stilted grandstanding and to and fro between speaker and questioner. I think there is further discussion to be had about the distinctiveness of the ‘new’ in African literature – whether located in genre, publishing context or the text itself – and I hope we can sustain this in other forums?

Rebecca Jones is a doctoral student at the Centre of West African Studies, University of Birmingham , where she is researching Yoruba-and English-language  travel writing in Nigeria from the early twentieth century to the present day. Her doctoral research spans newspapers, novels, local history  writing and internet-based travelogues. She is also a Research Fellow at the University of Birmingham, working on a project looking at everyday religious encounters, social identities and tolerance in southwest Nigeria. She spends a serious amount of time watching Nollywood films in the name of  “language training”.

At ASAUK 2012, Rebecca presented a paper entitled ‘“Nigeria is my playground”: Post-millennial Nigerian travel writing’,  in one of the two panels convened by Kate Haines and Katie Reid, under the rubric ‘The “post-millennial context” and African writing in English: Writing, production and reception since 2000’, in the New articulations in African literature and cultures Stream.

‘Tour of Duty’ by Pelu Awofeso

‘Looking for Transwonderland’ by Noo Saro-Wiwa

The panel Rebecca presented on also included papers from Paulina Grzeda (University of Warsaw), ‘‘Towards a New ‘South Africanness’: Autobiographical Writing in the Post-Millennial South Africa’, and Nmachika Nwokeabia (University of Wisconsin), ‘‘A Perfect Storm’: New Mediums, New Audiences, and Nigerian Writing of the 21st Century’.